Home > WORLD > Zlat’s the end of it? Ibrahimovic responds after being accused of ‘racism’ in furious ‘voodoo’ row with Lukaku 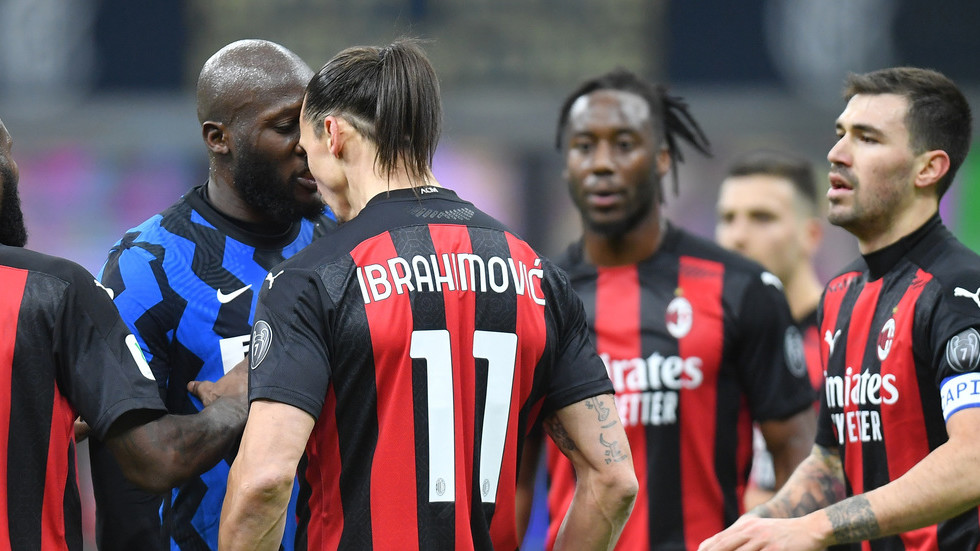 Zlatan Ibrahimovic has denied accusations of racism levied at him on social media following his bust-up with ex-Manchester United colleague Romelu Lukaku which saw the Swede tell him to “go and do your voodoo sh*t.”

Veteran striker Ibrahimovic has appeared to move to distance himself from the allegations, releasing a message to his social media profiles on Wednesday afternoon to say that “in Zlatan’s world there is no room for racism” after Tuesday’s Milanese derby boiled over following a confrontation between the two goal scorers.

The two players had to be separated near the end of the first half of the Coppa Italia quarterfinal which was eventually won by Lukaku’s Inter Milan 2-1 thanks to a late Christian Eriksen free kick, after both Ibrahimovic and Lukaku had hit the back of the net.

Both players were booked by the referee for their coming together in which Ibrahimovich was heard telling Lukaku to “Go do your voodoo sh*t, you little donkey.”

This fight between Zlatan and Lukaku went too far I think 💀 pic.twitter.com/Gjgbv1JEkf

Some had suggested that Ibrahimovic’s voodoo reference could be construed as a racist remark, but the Swede quickly took his opportunity to speak his mind and deny that there was any racist intent in the confrontation.

“In ZLATAN’s world there is no place for RACISM,” he tweeted. “We are all the same race – we are all equal!!” he wrote, before adding in true Zlatan style that “We are all PLAYERS some better than others.”

In ZLATAN’s world there is no place for RACISM.
We are all the same race – we are all equal !!
We are all PLAYERS some better then others.https://t.co/DhguHUOFte

Zlatan playing up a racist trope by telling a player of African descent to "go do your voodoo shit" and then getting red carded for a foul later in the game is some real voodoo-ish karma. https://t.co/hmJY2L8xWF

Tensions between the two players can be traced back to 11 months ago when Lukaku tweeted that there is a “new king in town” after he helped Inter to a 4-2 win in the Milan derby last season, a move which was interpreted as being a clear dig at Ibrahimovic.

This clearly irked Ibrahimovic, who offered his own social media riposte several months later after Milan’s victory against Inter in October, tweeting: “Milan never had a king, they have a God.”

Zlatan’s use of the term “voodoo” was seemingly a reference to reports that Lukaku had visited a Belgian ‘witch doctor’ for advice as he contemplated a contract extension with former club Everton.

Reports claimed that the witch doctor advised Lukaku to join Chelsea, who were suitors for the Belgian ace they had on their books as a teenager, but he instead joined Manchester United while Spanish striker Alvaro Morato instead filled the gap in Chelsea’s forward line.

Lukaku’s representatives later moved to rubbish the reports, saying at the time: “Romelu is very Catholic and voodoo is not part of his life or his beliefs. He simply had no faith in Everton.“

The tension between Ibrahimovic and Lukaku threatened to boil over after half-time too, with the Belgian appearing to chase Zlatan down the tunnel with both men appearing to throw insults towards one another related to their wives and mothers.

On this occasions, however, it was Lukaku who had the last laugh. Ibrahimovic was issued with marching orders in the 58th minute after he had given Milan a first-half lead. Lukaku levelled proceedings from the penalty spot just over 10 minutes later before former Tottenham man Eriksen’s late winner.

Myanmar coup: Medics to strike as anger at military grows

Nancy Pelosi is re-elected as US House speaker after AOC and other 'Squad' members swallow hard, avert giving gavel to Republican