Home > WORLD > ‘You should not be here’: Fuming NFL ace accuses ‘trash’ teammates of being overpaid in astonishing rant after latest loss (VIDEO) 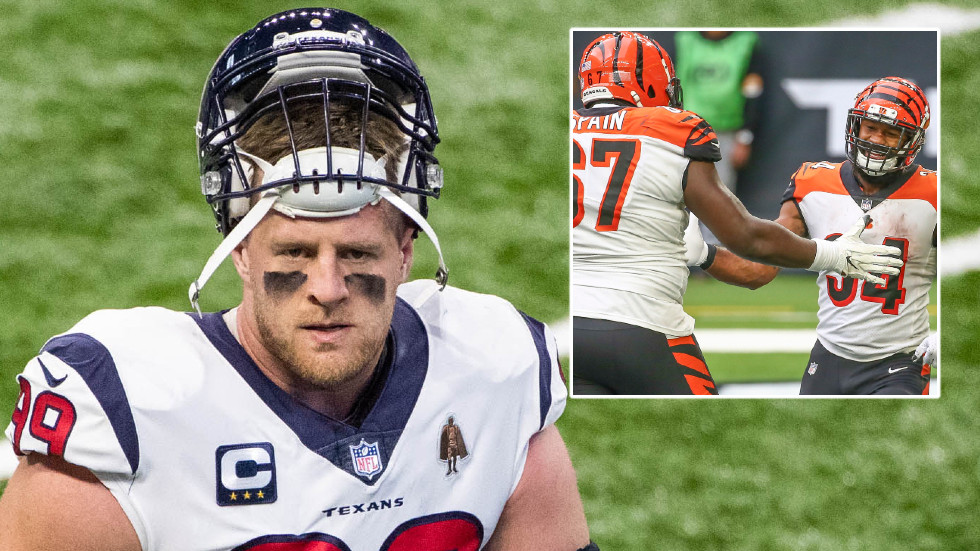 ‘You should not be here’: Fuming NFL ace accuses ‘trash’ teammates of being overpaid in astonishing rant after latest loss (VIDEO)

Houston Texans star defensive end JJ Watt has unleashed a passionate tirade against several of his teammates, accusing them of not putting the required graft in after his team slumped to their 11th defeat of the season in the NFL.

Watt, the three-time NFL Defensive Player of the Year and multiple-time Pro Bowl standout, hasn’t been overly-acquainted with the concept of defeat throughout his legendary career in the league but refused to go easy on several of his teammates after the Texans were bested by fellow strugglers the Cincinnati Bengals 37-31 to move their record for the season to a dismal four wins and 11 losses.

Speaking to the media after the game, Watt admitted that he and the rest of the defence played “horrendously” and that he was currently experiencing the most trying time of his decade-long tenure in the NFL – but far from rolling over and accepting defeat, Watt had some strong words for several of his teammates and suggested that many of them hadn’t pulled their weight this season.

After the Texans’ latest loss today, J.J. Watt was asked how he and his team would be able to bounce back next week. His answer is required watching for many. pic.twitter.com/3uRRnvBC53

He’s right! I’m a HS teacher and if I decided to bail on my students just because things weren’t going my way, and because I have a zoom meeting full of black screens, I’d be out of a job! My students deserve more, and so do the fans. These privileges asses need to step it up.

“If you can’t come in and put work in in the building, go out to the practice field and work hard, do your lifts and do what you’re supposed to do, you should not be here. This is a job. We are getting paid a whole lot of money.

“There are a lot of people that watch us and invest their time and money into buying our jerseys and buying a whole bunch of sh*t, and they care about it. They care every single week.

“We’re in Week 16 and we’re 4-11, and there are fans that watch this game, that show up to the stadium that put in time and energy and effort and care about this.

Yeah if he doesn’t go out and do his best next week that guy sitting on the couch drinking beer and wearing a jersey is going to be really sad and that’s not fair!

Nobody in the league feels the way he feels. He’s one of a kind. Just said what everyone of us think

Clearly, something is amiss in Houston. Last season, the Texans finished the season with a respectable 10-6 record which was enough for them to clinch the AFC South and advance into the post-season, knocking reigning Super Bowl champions the New England Patriots out of the playoffs.

Watt says that he doesn’t see anything close to the same commitment this year, pointibg the blame for this squarely at unnamed members of his team.

“This is a privilege,” Watt continued. “It’s the greatest job in the world. You get to go out and play a game.

“If you can’t care enough to go out there and give everything you’ve got and try your hardest, that’s bullsh*t.

“It’s not, and that sucks as a player to know that we’re not giving them what they deserve.”

The Texans’ surrender to the Bengals in Sunday’s NFL action was the second time this season that the team have lost four straight games.

The first of those sequences cost head coach Bill O’Brien his job earlier in the season but, as Watt appears to allege, the problems within the team run far deeper than some may have thought.

Russia will intervene on Yerevan’s side if Azerbaijani troops move across border, Armenian PM Pashinyan insists