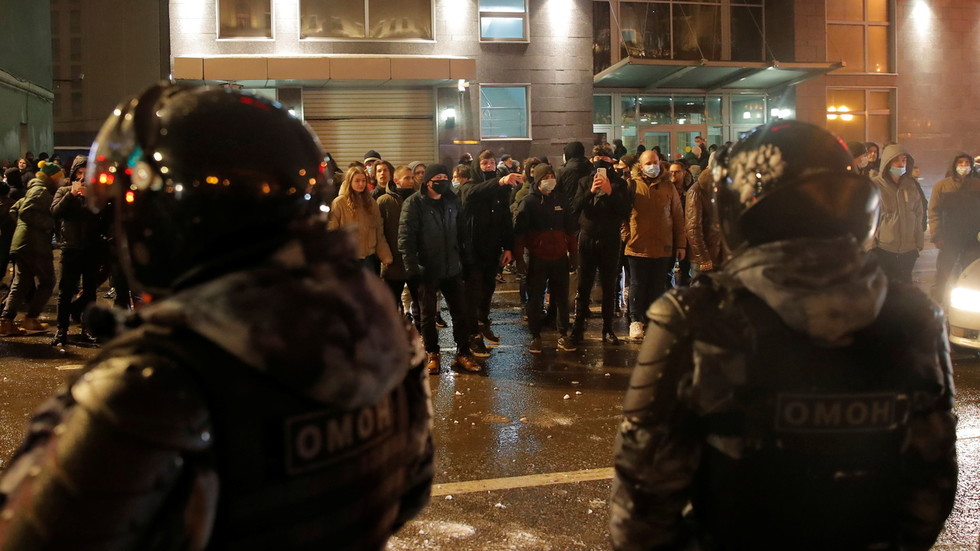 Thousands took to the streets of cities across Russia on Saturday as part of demonstrations organized by supporters of jailed opposition activist Alexey Navalny, as rallies in Moscow and St. Petersburg descended into violence.

Dramatic footage of authorities clashing with demonstrators in the capital has been shared widely online as Russia’s statutory jail watchdog put the number of arrests in Moscow at above 600. Riot police worked through the afternoon to disperse crowds from Pushkin Square, in the center of the city, as protesters scuffled with officers.

Protesters clash with police amid unsanctioned rally in Moscow in support of Navalnyhttps://t.co/pVO9uR13Zk pic.twitter.com/bpP4lZYfdJ

Lyubov Sobol, a close Navalny associate, was pulled out from a crowd of journalists by officers. She had previously been arrested on Thursday on suspicion of inciting protests. Also on Saturday, Yulia Navalnaya, the wife of the jailed Moscow protest leader, was taken into custody, posting a picture to Instagram from the police van. She was later released.

As the numbers around Pushkin Square dwindled, some of the remaining contingent began attacking a car that was said to belong to the security services, punching, kicking and smashing its windows. Reports say that the driver had his “eye gouged out” by the mob. “Details are now being clarified,” a security agency official told RIA Novosti. A total of 39 officers in the city had been injured, although none seriously, a source told the news agency.

A man, reported to be an anti-Navalny protester, was filmed atop a lamppost in the square, having unfurled a banner critical of the opposition figure. Cheers were heard as a man from the pro-Navalny crowd shimmied up the pole and violently pushed him off, breaking part of the streetlight at the same time.

Footage of a young boy being apprehended by officers was also widely shared, with many highlighting his young age and his determination to get away. A large number of young people appear to have been drawn to the gatherings after calls for support were aired in a number of viral videos on the streaming service TikTok. Russia’s Education Ministry had warned parents earlier this week of the risk of young people attending protests, telling them to keep them home and spend time as a family instead.

While official estimates are yet to be released, eyewitnesses report police making arrests after asking protesters to disperse. According to the website of NGO OVD-Info, an opposition resource that has received Western funding, more than 2,500 were detained. Mass gatherings in most parts of Russia have been banned under rules aimed at preventing the spread of Covid-19.

St. Petersburg, the country’s second largest city, was also a flashpoint for violence, with the local Fontanka news site publishing footage that appears to show an elderly woman being kicked over by an officer after blocking his path during the detention of an activist. Another shocking clip showed a man approaching a traffic policeman, punching him squarely in the face and walking off as the victim lays on the ground. A second officer then attempted to apprehend the assailant.

Unrest in Vladivostok, seven hours ahead of Moscow, began earlier in the day. A video showed crowds of people wrestling with police in an attempt to prevent an activist being detained. Some officers lost helmets, while others were hit or pushed back.

Leonid Volkov, a close ally of Navalny’s who live-streamed commentary of the events as they unfolded throughout the day, said that fresh protests would be called for next weekend.

Navalny has been jailed for 30 days after he allegedly breached the terms of a three-and-a-half year sentence, suspended for five years, when he lost contact with prison service authorities last autumn. He had been transferred to Berlin’s Charite hospital in a comatose state after what his supporters say was a state-sponsored assassination attempt with the nerve agent Novichok.

The Kremlin has denied, and even mocked, these claims, with President Vladimir Putin’s spokesman, Dmitry Peskov, adding that Navalny has a “persecution complex” and allegedly compares himself to Jesus.

The protests for his release have taken on an international dimension, with Russia’s Foreign Ministry accusing the local US Embassy of hypocrisy after its spokeswoman tweeted that the police response to opposition demonstrations was part of a “concerted campaign to suppress free speech [and] peaceful assembly.” Diplomats ridiculed the suggestion, pointing to the violent scenes that shocked the world earlier this month when supporters of former President Donald Trump stormed the Capitol building in Washington.

Rolling Stone will publish ‘thought leaders’ to ‘shape the future of the culture’... if they pay thousands

Palm cockatoo: Why a unique ‘drumming’ bird is in peril

Shell in Nigeria: Polluted communities ‘can sue in English courts’