Home > WORLD > ‘What a tool’: UFC’s Conor McGregor savaged over ‘tacky and classless’ X-rated $2mn watch in spending spree ahead of Poirier fight 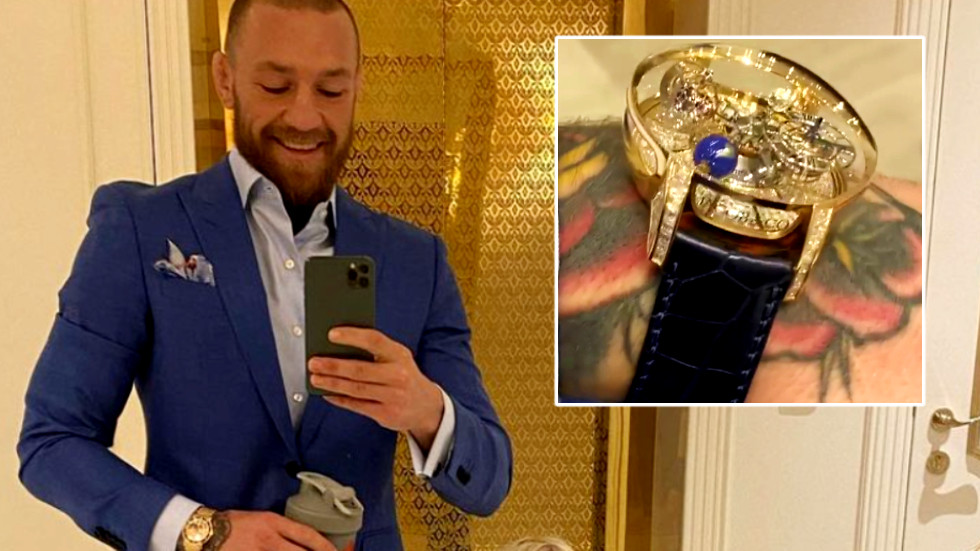 ‘What a tool’: UFC’s Conor McGregor savaged over ‘tacky and classless’ X-rated $2mn watch in spending spree ahead of Poirier fight

Returning UFC provocateur Conor McGregor has been mocked by fans after spending a reported $2 million on a watch that opens up to show two people having sex, bought as one of two timepieces alongside a new Bentley car and a suit.

McGregor snapped up the Rasputin piece, which reveals a crude sexual scene when a button is pressed, as part of a spree from luxury makers Jacob & Co that also included the Astronomia Tourbillon Baguette, which is valued at almost $1 million.

“Notorious” drove his pristine Rolls Royce car to pick up a lavish new Bentley in Abu Dhabi, where the former champion is clearly struggling to fill his time ahead of his rematch with Dustin Poirier on “Fight Island” in eight days.

“New watch, new suit, new whip alert,” he bragged on Instagram, showing off the less lascivious watch, which contains 342 cut diamonds on its backdrop and 80 diamonds on its lugs, as well as 133 on a dial making up 16.8 carats.

Desperate to show off his new possessions, McGregor posed in a new blue suit that included his initials – “C McG” – on its cuffs.

The 32-year-old’s outlandish outlay fell flat with many of his viewers, though, some of whom branded McGregor a “tool”, “classless” and questioned the quality of the garish watches.

“That watch looks sh*t – like something you’d win on a fairground stall,” said one. “And it’s called ‘baguette’, for f*ck’s sake.”

classless, so perfect for Conor.

Another sneered: “That’s f*cking ugly. When you get more than a million, do you immediately lose all sense of taste?”

McGregor pictured himself back in training with his coach, John Kavanagh, on Thursday, no doubt relishing the response he had received from his critics.

“Morning, all my dream chasers out there,” he had previously said as he posed in front of a line of glamorous cars. “Rule one: do it despite them.”

To paraphrase Dolly, it takes a lot of money to look this sh*t.

McGregor was said to have a net worth of $48 million by Forbes in 2020 and is expected to earn a basic purse of $5 million from his first fight in more than a year, rising to as much as $20 million after his cut of pay-per-view fees.

The watch company posted a reply supporting his apparent purchase, although Kavanagh has previously suggested that McGregor does not personally pay for many of his extravagances.

Why tf would anyone this ugly ass watch? 🤮

This is almost as bad as his whiskey

Microplastics, drugs and food – how jellyfish can help us