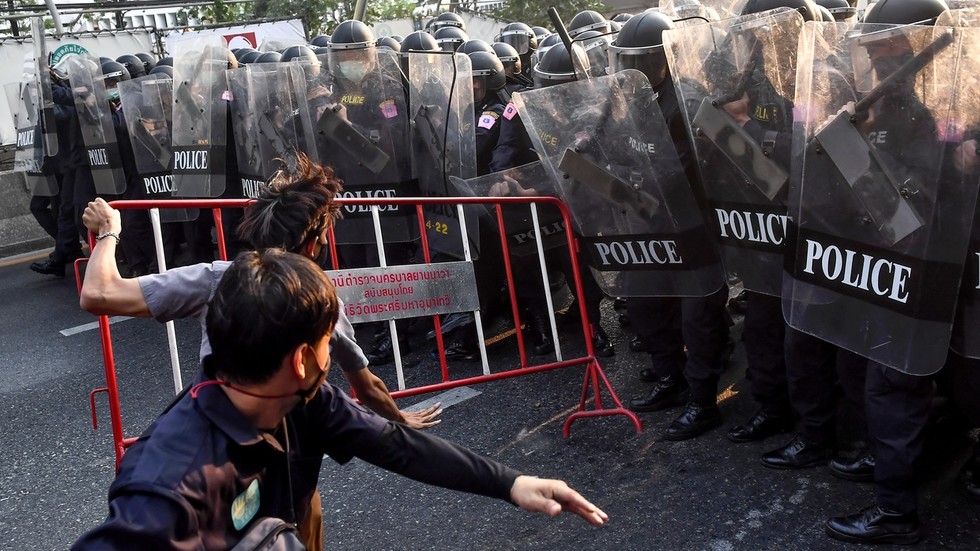 Thai police have broken up a protest rally staged by the opponents of a military coup in neighboring Myanmar. The activists gathered outside the country’s embassy in Bangkok.

Some 200 Myanmarese expats and local Thai activists gathered for a spontaneous protest outside Myanmar’s embassy, the Bangkok Post reported, citing police. They held flags of Myanmar’s National League for Democracy (NLD), whose leader Aung San Suu Kyi was arrested by the military on Monday, as well as photos of Suu Kyi.

“Thailand must not endorse and legitimize this coup – as well as the coup government,” opposition network We Volunteer (WeVo), whose members participated in the protest, said in a statement.

Police soon arrived to break up the rally. Armed with batons and shields, the officers pushed the small crowd away. Some protesters responded by throwing traffic cones, sections of a metal fence, and smoke bombs.

The police are carrying shields and batons, and have forced the protesters to retreat from the area. #ม็อบ1กุมภา #SaveMyanmar pic.twitter.com/37M6xkc2AD

According to news website Prachatai, three people were arrested.

Thai legal monitoring group iLaw said there were injuries among protesters and police.

Myanmar’s military have arrested senior government officials, including State Counsellor Aung San Suu Kyi, President U Win Myint and the heads of the country’s region. The armed forces claimed that the November 2020 general election, which was won by the NLD, was rigged, and declared a state of emergency for one year.

The coup was condemned by the UN and some Western countries. However, Thai Deputy Prime Minister Prawit Wongsuwan told reporters that the events in Myanmar were “their internal affairs.”

Thailand has seen military coups in 2006 and in 2014, and large-scale anti-government demonstrations last year.

The transgender lobby are fascists, says feminist campaigner who was tortured under Franco