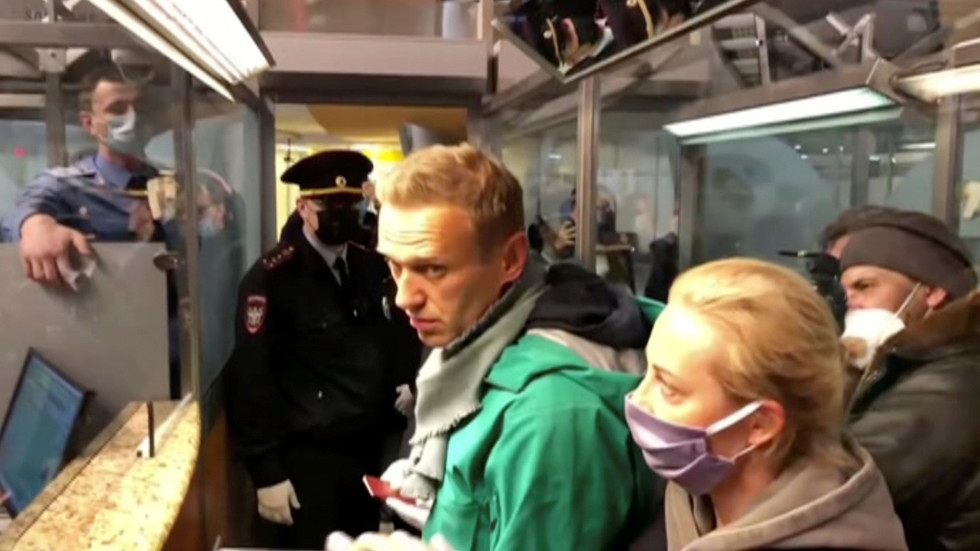 The detention of Russian opposition figure Alexey Navalny at Moscow’s Sheremetyevo Airport has been caught on video. The activist, who was on the wanted list, has returned to Russia from Germany after treatment.

The footage showed Navalny in a green coat being escorted by several uniformed police officers at the airport’s passport control area. He wasn’t handcuffed and didn’t resist law enforcement in any way.

Russia’s prison authority has confirmed the detention of the activist and blogger over breaching the terms of his probation from a previous criminal case. He will remain in custody until the court rules on pre-trial restrictions against him, it added.

Navalny’s plane was originally scheduled to land at Vnukovo International Airport where a large crowd of his supporters gathered, with minor scuffles and arrests reported. But the decision was made at the last moment to divert the plane to Sheremetyevo.

The activist had spent the last five months in Germany where he was delivered in a coma in late August 2020 after falling sick on a domestic flight in Russia a few days before that.

The medics at Charite clinic in Berlin claimed that their tests showed that Navalny was poisoned with a nerve agent from the Novichok group. The patient himself has blamed the Kremlin for masterminding the attack against him.

Russian authorities have many times denied those accusations, while also expressing regret over Germany’s unwillingness to back them up with the activist’s medical data or jointly investigate the incident.

‘Where were you a month ago?’ With Trump gone, Amazon greets Biden with offer to help speed distribution of Covid-19 vaccines

‘It’s like the Twilight Zone’: Times Square set to be empty for New Year, with crowds BANNED for first time in over a century

Trader gets painted stones instead of $36m of copper

In pictures: Tens of thousands gather for pro-Navalny protests