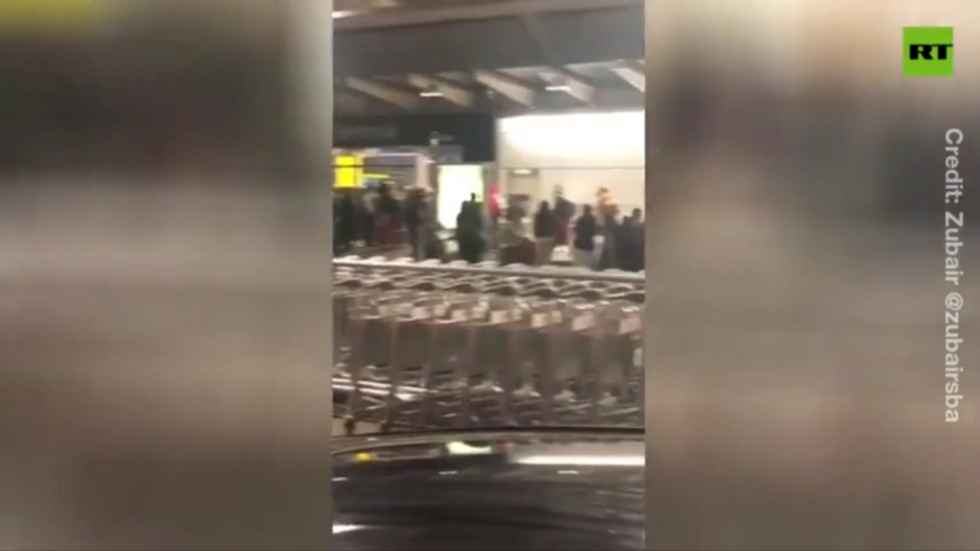 Hundreds of passengers were left stranded at Heathrow Airport amid the newly-imposed Tier 4 restrictions, creating chaos and overcrowding, and tense scenes at the world’s seventh-busiest airport.

Multiple countries have imposed travel bans on passengers arriving from the UK and even halted the air connection with it, amid concerns over a new mutant Covid-19 strain which has swept the country and been detected elsewhere in mainland Europe.

A slew of videos was shared on social media purporting to show the vast queues and crowds of people attempting to flee the country ahead of the yuletide Tier 4 lockdown which came into effect over the weekend.

The queue to literally get in the door of Heathrow Terminal 2 right now pic.twitter.com/NGTJl8QGfL

Scores of people were left stranded amid multiple reports of airlines overbooking flights.

“All passengers are advised to check their flight status and travel advice before travelling to the airport,” Heathrow Airport tweeted.

“If you do not have a ticket or you are destined for a country with an active UK ban in place, you will not be able to check-in and therefore should contact your airline.”

Hundreds of people overbooked for the 20:55 to Dublin @British_Airways pic.twitter.com/UbMZTcNbY9

Heathrow Terminal 5, BA have booked hundreds and hundreds of people onto a flight that was fully booked to begin with. A disgrace pic.twitter.com/G6crrAlDuJ

Over a dozen countries, including EU members as well as Israel, Kuwait, Canada, Turkey, etc. have left the UK isolated amid fears that the new strain may be even more contagious than Covid-19 itself.

The bans range in length from 24 hours up to two weeks while more data is gathered on the worrying new strain, known as VUI-202012/01. The new strain is reportedly up to 70 percent more transmissible than its predecessors.

@British_Airways , absolute shambles – sell a full flight to Dublin when they don’t have one! There is about 200 Irish stranded now, with no information! pic.twitter.com/6PR5v6Gn9s

#London #heathrow Terminal 2 this evening during #Lockdown3 / #tier4 after dropping my brother to work. This is why we have people dying. These fools are going to spread it even more #BorisFailedBritain #COVIDIOTS #Covid_19 #Covid19UK @SkyNews @itvnews @Independent @SkyNewsBreak pic.twitter.com/tb6j1wZEZm

The majority of new cases in the UK were recorded in London and the southeast of England, but a direct link with the new strain has yet to be definitively proven, though it is the presumed likely cause.

“It has also been detected in Wales, in Scotland, we have not had any detected in Northern Ireland,” Dr Susan Hopkins, from Public Health England (PHE) said in an interview.

Health Secretary Matt Hancock said the outbreak allegedly caused by the new strain is “out of control” adding that it creates “an incredibly difficult end to frankly an awful year.”

The Eurotunnel suspended access to its terminal while the port of Dover is also temporarily closed. Meanwhile, authorities in Italy confirmed the new strain has already been detected in the country, while authorities in France suspect cases may be found there, too.

Vladimir Putin May Visit India In The First Half Of 2021: Russian Envoy