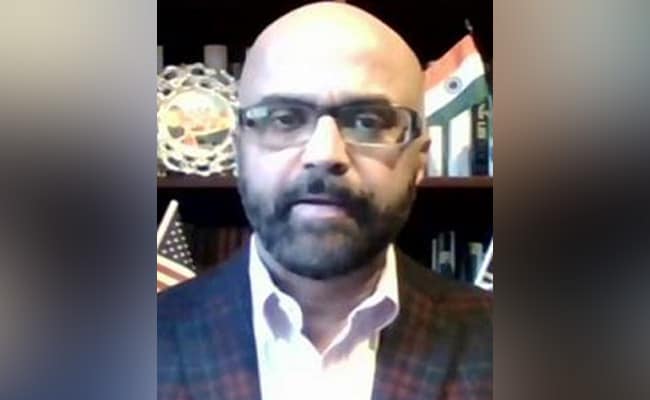 A lone Indian flag sticking out in a sea of pro-Trump banners in the rally leading up to the US Capitol mayhem triggered its own narrative amid worldwide condemnation of the violence. The man who waved that flag, Vincent Xavier, says his intention was to prove that America is “not racist as it is portrayed to be” and embraces diversity.

The image of the tricolour at Capitol Hill seeded sparring between Congress MP Shashi Tharoor and BJP parliamentarian Varun Gandhi on Twitter, with scores of users sharing and reacting to the exchange.

Vincent Xavier responded to the two politicians by posting flags of other countries, which he said were also seen at the rally.

“There is nothing to be ashamed of, we are celebrating our diversity. The world has to know that America is not the racist country it is portrayed as. That the Republican party is not white supremacist. If they were racist, they would not allow me to carry the Indian flag. It was actually showing more respect,” he told NDTV.

In the bitter back-and-forth that started with Mr Tharoor criticising the Indian tricolour being waved at what rapidly became one of the lowest moments in American democracy, Mr Gandhi flagged a photo of the Congress leader with Vincent Xavier, posted online by users.

Mr Xavier said he had met with Mr Tharoor in 2015 and had interviewed him over lunch in Washington.

“I met him twice after that in Indian American, Malayali events. Tharoor is a very good orator.  I am always jealous of his English skills…I don’t know whether I would consider him a great leader…I would want him to take a bigger role and rescue the Congress party in the shape it is in today, instead of getting into such controversies,” he said.

Mr Xavier, who describes himself as a loyalist of outgoing President Donald Trump, is a resident of Virginia and is originally from Kerala. He had been a member of the President’s Export Council. He said he went to the rally as there is always a “lot of patriotic fervour” in Trump rallies and “some miscreants” broke into the Capitol that day.

“I am a Republican Party operative. I have gone to many Trump rallies. There is a lot of patriotic fervor there, lot of bands, music, national anthem singing…Some miscreants we believe were planted by the opposition, BLM (Black Lives Matter) people who got in and broke into the Capitol building in a very difficult exercise…crawling on the wall like military people. They opened the door and some others in their excitement got in…You cannot brand this beautiful nice patriotic rally as bad. We believe they were not really our people,” said the 54-year-old, distancing himself from the mob that stormed the Capitol.

“It was in no way disrespecting the Indian flag,” he said, on whether he had a sense of regret after the way the events went down that day.

On Trump being blocked by Facebook and Twitter for his posts seen to incite the widely condemned violence, Mr Xavier said: “You are giving a lot of credibility to bad policies. When I talked about inhaling warm water with turmeric powder to take care of Covid, they blocked me from Facebook. Whatever social media does is not the right thing, it is against American values.”

Karnataka To Test Arrivals From UK, 2 Other Nations For COVID-19