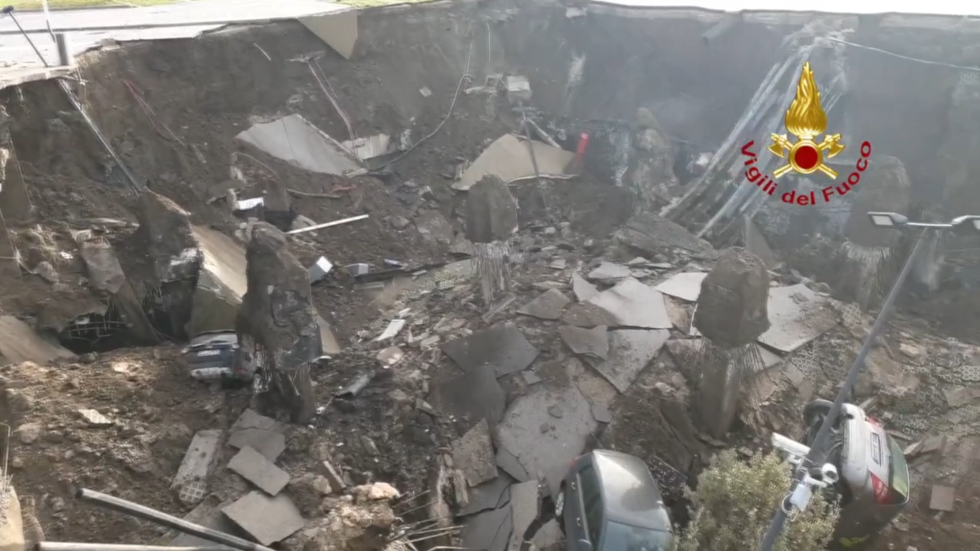 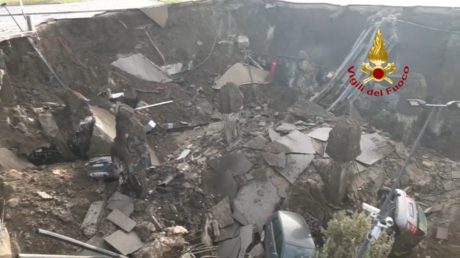 A vast crack in the Earth has opened near the Ponticelli Hospital in Naples following a loud noise that was initially thought to have been an explosion. The facility’s Covid patient center was evacuated immediately.

There are as yet no reports of injuries or deaths relating to the incident, though firefighters have swarmed the scene and investigations into the cause are already underway.  Canine units have been deployed to search for anyone who may have been trapped in their cars.

The hospital remains in a state of emergency with generators providing electricity, though water supplies remain cut off.

A massive hole, measuring an estimated 50 meters (164 feet) by 50 meters and some 15 meters (49 feet) deep, cracked open in the hospital’s staff car park, swallowing some vehicles.

The incident happened between 6:30 and 6:45 local time and was initially thought to have been an explosion, authorities now suspect it was a subterranean collapse.

The coordinators in charge of the hospital’s Covid-19 unit have said it has been temporarily shuttered “due to the impossibility of guaranteeing hot water and electricity. At the moment there is no element that leads to think of a malicious act”.

Naples Public Prosecutor’s Office will conduct an investigation into the cause of the incident, though foul play is not suspected.

Initial reports indicate that the hospital’s subterranean oxygen pipes may have imploded or that a leak may have triggered a build up of gas and a subsequent explosion.

7-Day Institutional Quarantine For Passengers Arriving In Delhi From UK