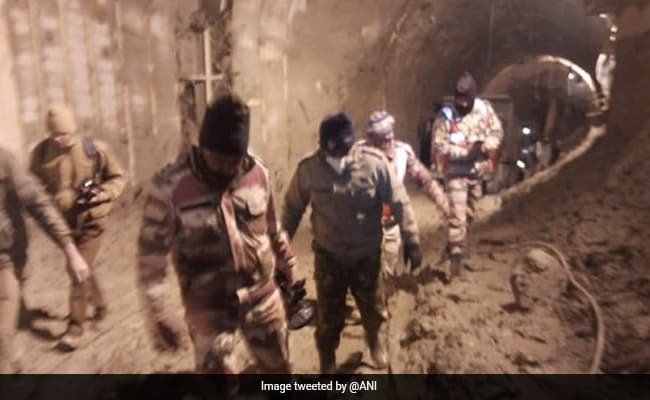 The rescuers are now also focusing on drilling through the hardened debris in the choked tunnel.

Rescue agencies began drilling through the debris in the Tapovan tunnel to establish contact with over 30 people trapped inside after a flash flood, an operation which stalled briefly Thursday when the Dhauliganga river began swelling again.

The confirmed death count in the Uttarakhand disaster rose to 35 with the recovery of another body in Gauchar and 169 people remain missing since Sunday, after a glacier break triggered a surge of water in the Alaknanda river system.

In an apparent change in strategy, the rescuers are now also focusing on drilling through the hardened debris in the choked tunnel in Chamoli district, rather than just shifting mounds of silt and sludge heaped there by the sudden flood.

The aim for now is to set up a “life-saving system”, possibly to pump oxygen into the blocked tunnel.

On Thursday afternoon, there was another scare when the water of the Dhauliganga — a tributary of the Alaknanda — began rising again.

Rescue workers at the Tapovan site scrambled to safety, pulling their heavy machinery to higher ground. A press briefing ended midway and the operation halted.

It resumed after 45 minutes with cautious officials saying they will send in only small teams to the rescue site for now.

The centre of the rescue operation remains the 1.5-km “head-race tunnel” — a part of the 2.5-km long network of tunnels — at the 480-MW Tapovan-Vishnugad hydel power project of the National Thermal Power Corporation (NTPC).

Rescuers began the drilling in the early hours of Thursday.

“A drilling operation was started by the rescue teams at 2 am to peep into the slush-flushing tunnel that is about 12-13 metres below,” Vivek Kumar Pandey, the spokesperson for the lead rescue agency, Indo-Tibetan Border Police (ITBP), said in Delhi.

As the continuous flow of slush and silt remains a major obstacle between the rescuers and those trapped inside, a boring operation by a huge machine is being undertaken to see if this problem can be addressed in a different way and the teams can go further deep inside, he added.

Drilling through the debris started from around 68 metres inside the tunnel, Garhwal Commissioner Ravinath Raman told news agency PTI.

The focus at the moment is to set up a “life-saving system”, including oxygen, for those trapped inside by drilling through the debris, Mr Raman said.

The drilling is to be done for 12 metres to access their probable location, he added.

Till Wednesday, about 120 metres of sludge from the mouth of the tunnel was cleared and the trapped workers stated to be located somewhere at 180 metres, where the tunnel takes a turn.

An officer had earlier said there was no doubt that those trapped inside must be in a bad situation without food and water.

“But there is hope against hope that they are surviving somehow as the temperature inside the tunnel is about 20-25 degrees Celsius and some oxygen is possibly available to them,” the officer said.

At the Tapovan press briefing, Garhwal Commissioner Raman was asked about reports of rising water level in the upper reaches of Rishiganga. The official said he had no authentic information, terming it as “no more than a rumour” at that point. Just then, fresh information came in and the press conference dispersed.

“Our strategy is evolving as the situation unfolds,” he told reporters later.

“We are coordinating with NTPC officials and scientists in running the rescue operation,” he said.

Garhwal Range DIG Niru Garg said, “As you can see, all the agencies are working with perfect coordination with a resolve to save as many lives as possible.”

When asked about the possible condition of those trapped in the tunnel for over four days, another official said, “I am a technical person. I wouldn’t hazard a guess. But as the Governor said, let’s all pray to Badri Vishal that all of them are safe.”

Earlier, Uttarakhand Governor Baby Rani Maurya faced the angry family members of some missing workers when she visited the site. Some of them broke down as they asked her to get the rescue operation speeded up.

Ms Maurya asked them to be patient, assuring that the agencies involved will not spare any effort.

The worried relatives also claimed that some of the machines were not working properly, slowing the pace of the rescue effort.

Some also claimed that all the effort was focused on the tunnel, and not on finding people who went missing from the barrage at the same hydel project.

ITBP chief SS Deswal had told PTI on Wednesday that his men and those from other agencies will continue with the operation for “any length of time” or till a logical conclusion is reached and the trapped workers located.

Five Killed In Attack On UN Convoy In Kabul