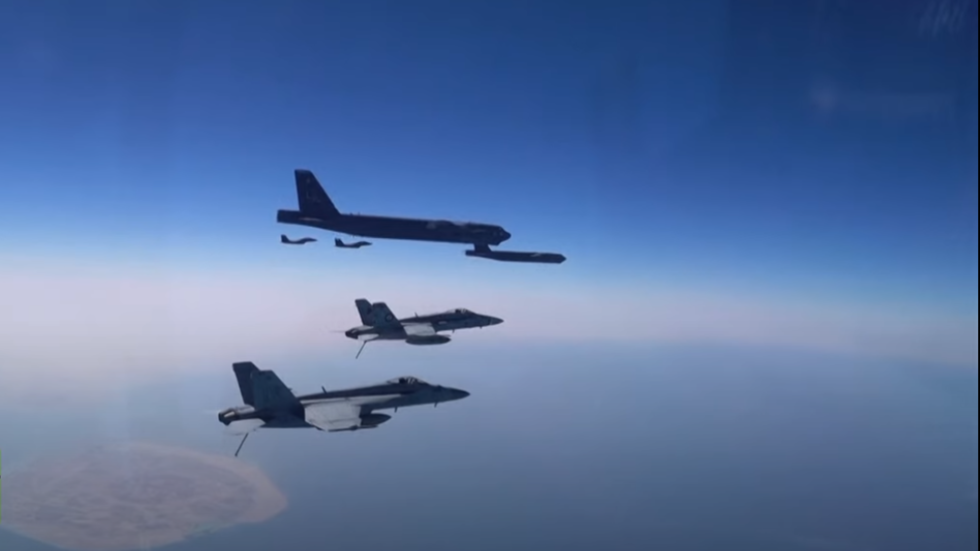 The US Air Force has published footage of its B-52 Stratofortress nuclear-capable bombers flying over the Persian Gulf in what was described as a mission showcasing America’s “global reach capability.”

The mission that saw B-52s flying non-stop from the Barksdale Air Force Base in Louisiana was conducted on Wednesday, just a week after President Joe Biden’s inauguration. During their flyover of the Gulf, the American bombers were accompanied by US Navy and US Marines’ fighters as well as Saudi Air Force jets.

A video released by the US Army Central Command on Saturday shows at least two bombers in the skies of the Middle East accompanied by a total of four American and Saudi fighter jets. The “defensive” mission was aimed at “strengthening partnerships” and demonstrating the US military’s ability to “deploy airpower anywhere in the world to deter potential aggression,” the US Air Forces Central said in a series of Twitter posts.

The US military did not explicitly mention Iran in its statements but some media still said it might have been a signal to the Islamic Republic amid ongoing tensions between Washington and Tehran. Relations between the two nations became increasingly hostile under Biden’s predecessor, Donald Trump.

1/3 – B-52s from @TeamBarksdale flew over the @CENTCOM theater yesterday during a Bomber Task Force mission, aimed at strengthening partnerships in the region and showcasing the @usairforce Global Reach capability. pic.twitter.com/r6KiIETejy

Under the Trump administration, the US unilaterally withdrew from the 2015 Iranian nuclear deal and reimposed all previously lifted sanctions against Iran as well as introduced new ones, vowing to bring Iranian oil exports to “zero.” In January 2020, the US assassinated a high-ranking Iranian General Qassem Soleimani in a targeted drone strike during his visit to Iraq, further leading to a spike in tensions between Washington and Tehran.

The Biden administration has so far demonstrated a more reserved attitude toward Tehran and repeatedly signaled the US’ intention to return to the nuclear deal. However, the Wednesday flight also showed that Washington apparently is not ready to abandon such demonstrations of force when it comes to its adversaries, particularly in the Middle East.

Earlier, Tehran urged Biden to return to the deal and lift all sanctions imposed during Trump’s time in office, adding that only after that would it return to its own commitments under the agreement related to the uranium-enrichment levels and the limits on the stock of enriched uranium Iran can possess.

Boy Dies After Being Attacked By Stray Dogs In Telangana: Police

US Justice Department suing Walmart, accusing them of helping to fuel opioid crisis through pharmacies

The K-pop inspired band that challenged gender norms in Kazakhstan

Rescued orangutans returned to the wild