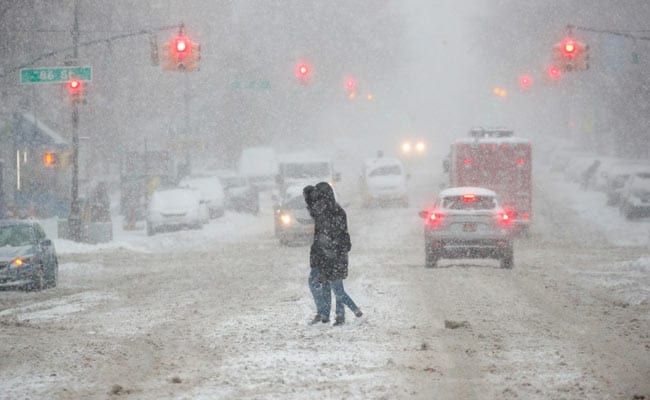 People cross a road during a snow storm, amid the coronavirus disease (COVID-19) pandemic.

A powerful winter storm engulfed the U.S. Northeast on Monday, blanketing much of the region in heavy snow, blasting coastal areas with high winds and bringing New York City and other major urban centers to nearly a standstill.

The nor’easter – an East Coast storm with winds blowing from the northeast – could bring accumulations of 1 to 2 feet (31 cm to 61 cm) to the country’s most densely populated region before tapering off on Tuesday, the National Weather Service said.

By early Monday evening, the nor’easter had dumped as much as 27 inches (68 cm) of snow in parts of New Jersey and Pennsylvania and 17 inches (43 cm) in parts of New York City. More than 13 inches (33 cm) covered Manhattan’s Central Park, as bands of snow began moving north into New England.

By early evening, Boston reported a mix of snow and rain, the Weather Service’s forecaster Marc Chenard said. But just a few miles inland from the New England coast, up to 12 inches (30 cm) of snow were reported, he said. By Tuesday morning, some areas could see 15 inches (38 cm).

If the winter storm achieves its maximum potential, it would be the first to bring more than 2 feet of snow in New York City since 2016, when a record-breaking blizzard dumped 27.5 inches (70 cm) on the country’s most populous city, according to the weather service.

Damaging winds of 30 to 40 miles per hour (48 to 64 km per hour) were forecast along the New Jersey coast. In Massachusetts, the weather service forecast gusts up to 60 mph (97 kph) on Cape Cod and the islands of Martha’s Vineyard and Nantucket.

Power outages driven by wind and heavy, wet snow are possible overnight across the region, but no major outages were reported early Monday evening.

“It’s the storm of the century!” predicted snowplow operator James Carew, 56, of Union, New Jersey, noting he had been clearing snow for 30 years.

The storm’s intensity and rapid snow buildup means multiple visits to clear residential driveways like the one he was plowing in Maplewood, New Jersey. “This is a 10 out of 10 for storms,” Carew said.

New York state Governor Andrew Cuomo declared a state of emergency in the city and 44 other counties, and warned of possible road closures in the hours ahead.

More than 90% of flights at New York City-area airports were canceled, said Rick Cotton, executive director of the Port Authority of New York and New Jersey, and operations suspended at La Guardia and John F. Kennedy airports in Queens.

COVID-19 vaccination sites and testing locations were forced to close or change schedules.

All six vaccine mega-sites across New Jersey were closed on Monday, and vaccine appointments were rescheduled at many New York state-run sites. Vaccinations and testing were also suspended at New York City public hospitals and health centers.

De Blasio said that, with the city facing up to 22 inches (56 cm) of snow, vaccinations would be postponed on Tuesday. “The storm is disrupting our vaccination effort, and we need to keep people safe,” he told a news briefing.

Some Northeasterners welcomed the heavy snowfall, sharing on social media photos of streets, parks and backyards blanketed with the white stuff, and happy pets playing in the snow.

“The amount of snow in my backyard is insane! Plus it’s still snowing! It’s halfway up the back fence,” New York City resident Sarah posted on Twitter.