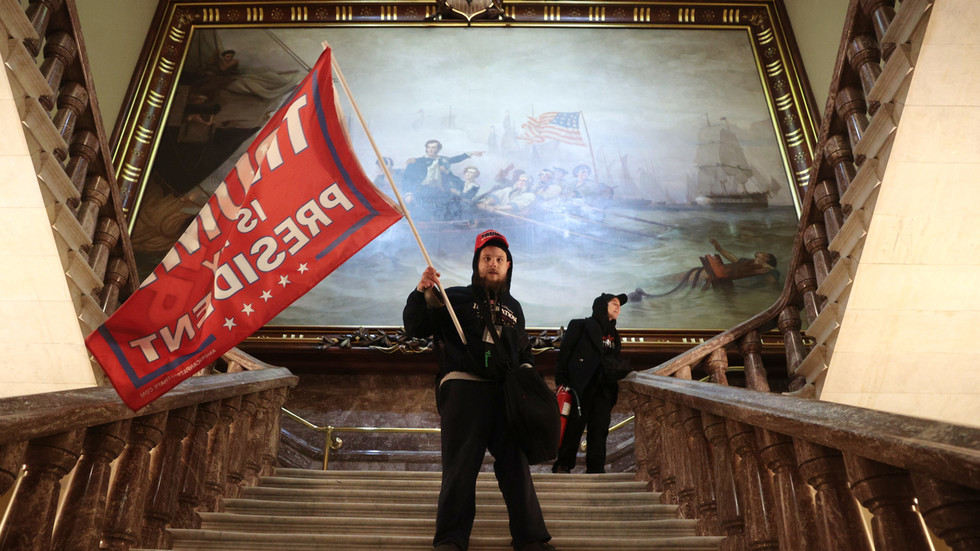 US Congress goes into LOCKDOWN as pro-Trump protesters storm Capitol

Vice President Mike Pence was reportedly evacuated while members of the US Congress sheltered in place, as Capitol Police struggled to hold back a crowd of President Donald Trump’s supporters who stormed the building.

Pence was presiding over the joint session of Congress that was expected to formally certify the 2020 election for Democrat Joe Biden. The House and the Senate had broken off into separate sessions to discuss objections from some Republican lawmakers to the validity of results from Arizona, when protesters gathered outside breached the outer perimeter fence.

Despite tear gas and batons deployed by the outnumbered Capitol Police, some of the demonstrators have made their way into the building and are protesting outside the Senate chambers, according to reporters inside.

Footage from inside the building shows some of the protesters banging on the doors and making their way inside.

They breached the Capitol pic.twitter.com/tWKxojW2Hr

Protestors have entered the Capitol. pic.twitter.com/dzaDGn5MoC

The Capitol Police sent out a memo warning members of Congress and the media of an “external security threat” and telling them to stay away from windows.

USCP announces “a security threat inside the building” pic.twitter.com/m3cSFcVzx5

Members of the House of Representatives were reportedly told by Capitol Police to put on their gas masks, in what appears to be preparation to use teargas against the demonstrators.

Trump himself has disavowed any violence, urging the protesters to “stay peaceful” and saying that Capitol Police are “truly on the side of our Country.”

Please support our Capitol Police and Law Enforcement. They are truly on the side of our Country. Stay peaceful!

Tens of thousands of Trump supporters gathered in Washington, DC on Wednesday for a “Stop the Steal” rally, backing the president’s claims that Biden’s victory in the 2020 election was the result of fraud and irregularities in half a dozen states.

Meanwhile, the Republican party leadership has refused to side with Trump on the issue, with outgoing Senate Majority Leader Mitch McConnell (R-Kentucky) arguing that not certifying Biden and ceding power to the Democrats would damage American democracy.

“If this election were overturned by mere allegations from the losing side, our democracy would enter a death spiral. We’d never see the whole nation accept an election again,” McConnell said on the Senate floor.

In response to the events on Capitol Hill, DC Mayor Muriel Bowser has ordered a citywide curfew starting at 6pm local time, and in effect until 6am on Thursday.

We Support Africa's Empowerment With Transparency, Inclusivity: India At UN

‘It wasn’t about money’: NBA star says he could have asked for more in record-breaking $205mn deal as fans slam ‘obscene’ contract

A scene in The Pianist changed Arson Fahim's life

‘Can we do anything right?’: Delays, wrong accounts, unexplained changes lead to mass frustration over 2nd US stimulus checks