Home > WORLD > US Capitol riot: ‘It was like a zombie movie’ 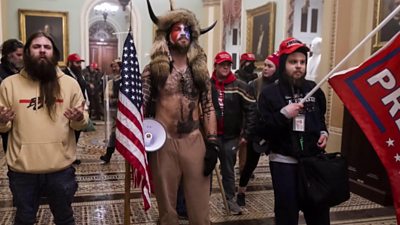 US Capitol riot: ‘It was like a zombie movie’

When a mob of President Trump’s supporters stormed the US Capitol, the media was there to document what happened.

Some of the photographs that emerged have captured the drama, the horror and the importance of the moment. Images of one man carrying the confederate flag, and of another sitting in the Speaker of the House Nancy Pelosi’s chair have been shared the world over.

The man that took them is Jim Lo Scalzo and he told BBC Outside Source the story behind them.

'Why I quit my job after my home burned down'