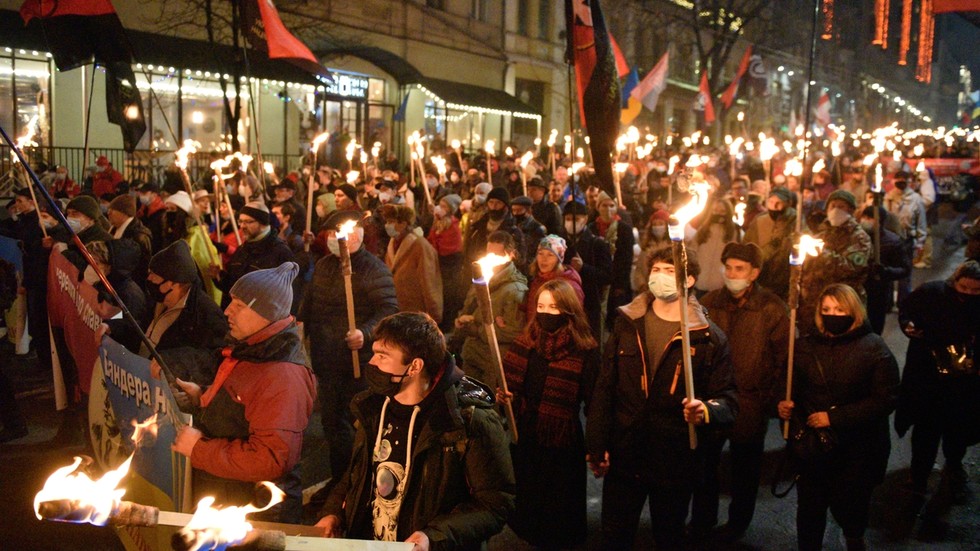 Israel’s most senior diplomat in Ukraine has faced an onslaught of anti-Semitic abuse and calls for protests outside his country’s embassy after he condemned a march to remember a Nazi collaborator in the Ukrainian capital.

Joel Lion, Israel’s ambassador to the troubled Eastern European state, tweeted his concern over a thousand-strong march in Kiev, honoring the 112th anniversary of the birth of nationalist leader Stepan Bandera. “We strongly condemn any glorification of collaborators with the Nazi regime,” Lion said. “It is time for Ukraine to come to terms with its past.”

The procession made headlines on New Year’s Day, with demonstrators carrying torches and placards honoring Bandera, a wartime leader of the Organization of Ukrainian Nationalists. His supporters see him as a founding figure of the country’s independence movement, while others hold him accountable for a series of ethnic pogroms against ethnic Poles and Jews, and partially responsible for the Holocaust in the region.

However, Lion’s intervention has drawn sharp criticism from Ukrainian ultranationalists with social media users accusing the diplomat of being “a disgrace to the Jewish people” and insisting he “stay out of our Ukrainian heroes.” One commenter added that, underneath the traditional Jewish kippah head covering, the Ambassador had “a Russian star.”

Evgeniy Karas, a far-right leader who has fought against Moscow-backed rebel groups in the east of Ukraine, called for action in response to Lion’s comments. On his Telegram channel, he suggested that his followers meet outside the embassy the following day. Additionally, he insisted that the Israeli envoy was “the ambassador for the Holodomor,” the Soviet-era famine that saw millions starve to death in Ukraine, Russia and Kazakhstan.

Considered by some as a deliberate policy choice by Joseph Stalin’s USSR, the Holodomor has been the subject of a series of anti-Semitic conspiracy theories. Historian Victoria Khiterer, a founding member of a holocaust research organization at the site of the Babi Yar massacre, has written that Jewish people became a target of ire when rural workers sought refuge from starvation in cities and towns that were also struggling with food shortages, leading to tensions between local communities.

An RT investigation in December uncovered how ultranationalist groups that continue to honor Bandera and his fighters are receiving funds from the Ukrainian government to expose young people to their ideology. One camp, in which participants as young as 18 fight in hand-to-hand combat for up to 60 hours, describes itself as being held “not only to honor the memory of fighters for the freedom of Ukraine” but to be “a forge of followers of UPA soldiers.” Organizers boast on their website that “proof of this is public activity and the participation of ‘graduates’ in the modern Russian-Ukrainian war.”

Myanmar coup: Pools and princesses as protesters go all out

Italy's Mario Draghi to be sworn in as prime minister

Mary Wilson – a Motown legend and a style icon

'If the others go I'll go': Inside China's scheme to transfer Uighurs into work