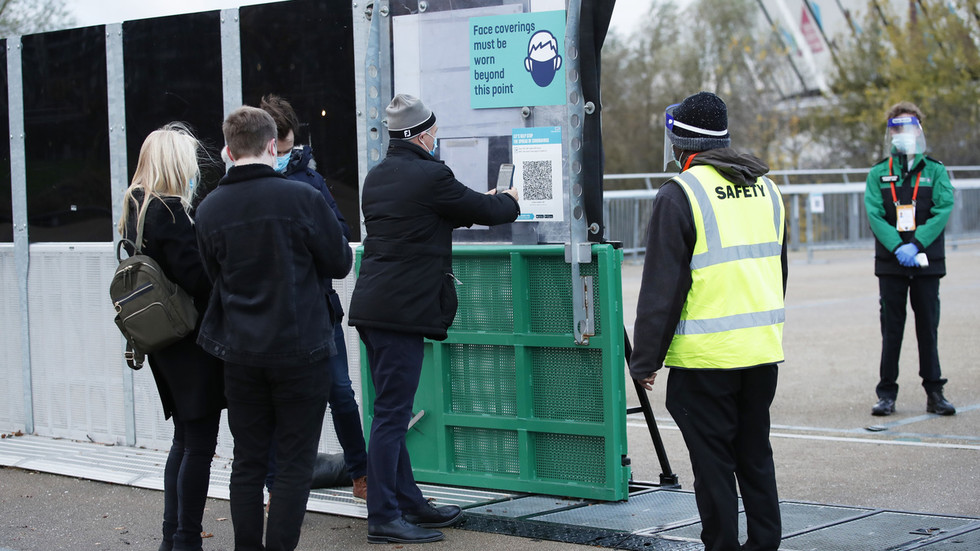 The British government has hired two firms to explore how a national database of Covid-19 test results could be used to give access to public venues only to people free from the disease, contract records show.

The companies, Netcompany UK and The Hub Company, have been given contracts worth £42,000 and £36,000 respectively (over $100,000 in total) to conduct work on “Covid-19 Certification/Passport MVP [minimum viable product].” The Daily Mail was the first to report on the records, which were made public last week.

Under the proposed system, people would be assigned individual QR codes referring to a national database for Covid-19 test results. Public venues like pubs, schools and workplaces would be able to scan the code to check the profile, which includes a photo, and confirm the visitor is Covid-19 free before letting them in.

The idea to somehow link participation in social life with Covid-19 status has been floated by various governments since the start of the pandemic. The UK’s version, as reported by the Telegraph in November, envisions a “freedom pass” issued to those who receive two negative tests in a week.

Logistical difficulties with mass testing and the fact that patients who have recovered can be reinfected have prevented practical implementation so far. But the introduction of vaccines has brought the idea back into the spotlight. Some nations like Israel and Ireland plan to give privileges to vaccinated people, but in the UK, there is strong public resentment to this approach. Critics say it would create an “apartheid” society that discriminates against vaccine-dodgers.

Boris Johnson’s government has repeatedly said that it has no plans to make the Covid-19 vaccine mandatory either directly or through coercion. Vaccination cards given to recipients will not be used as some sort of ticket to a football match or a pub, officials said.

Sources in the Department of Health told the Daily Mail that the exploratory work revealed in the contracts does not mean that the system will be introduced anytime soon, and said there were no plans to link it to vaccination records.

There are no plans to introduce immunity passports.

But sceptics seem to mistrust the government’s intentions and see the contracts as foreshadowing a grim future in the UK, with a controlling government curtailing people’s freedoms.

The government has commissioned the COVID passport. Meaning your freedom of movement will depend on your status.

Next step – social points for being good compliant boys and girls…

Our children deserve better. Get brave and stand up to this tyranny before it’s too late 🙏 pic.twitter.com/EQBTaeHrfg

Confirmation of what I told you a couple of days ago. The passport will not only be used to demonstrate if the bearer is negative, it will also contain their vaccination record. No mention of that in the article below, but it's inevitable right? Tyranny.https://t.co/GxiydZMZ8d

Even if the system is dependent only on tests and not vaccinations, there are still considerations about its practicality. Critics argue that mass testing inevitably generates a skewed picture of the pandemic situation due to the large number of false positives and false negatives, and fails to inform the public and the government about the actual threat posed by the virus.

Cambridge ranked one of UK’s worst universities for free speech, days after institution pledged to ‘tolerate’ all views