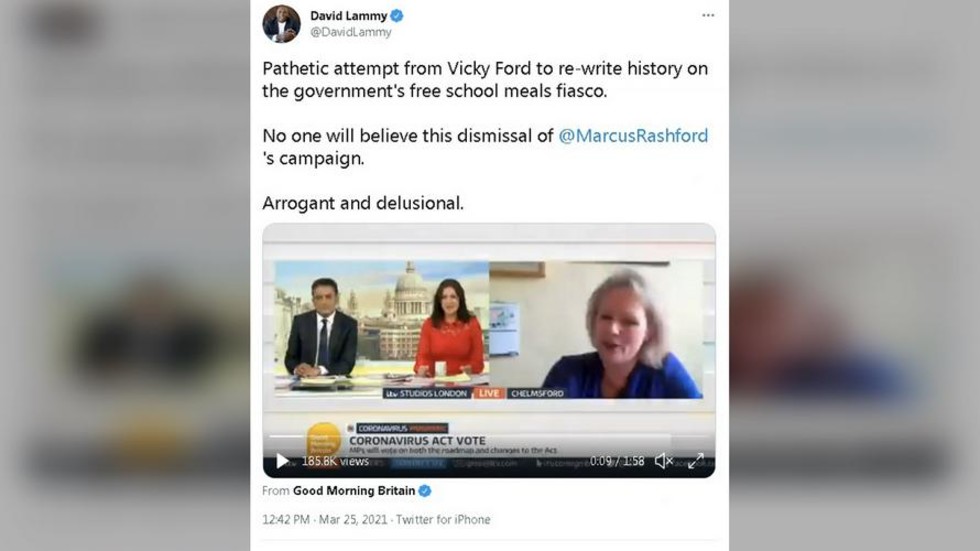 UK Children’s Minister Vicky Ford kicked off a storm on Thursday after she ‘downplayed’ the efforts of Manchester United footballer Marcus Rashford in securing free school meals for vulnerable children during the lockdown.

During a heated interview on the Good Morning Britain show, the Conservative MP appeared to take credit for the scheme – while claiming that Rashford’s efforts had been in “support” of the programme – despite having voted last October against extending it during school term breaks.

When asked whether it took Rashford’s campaign to make the government extend the free school meals scheme, Ford said, “No, it didn’t actually… We had put in support elsewhere and have continued to do so.”

“I had actually extended the eligibility for the free school meals right at the beginning of the lockdown. Marcus has done some really super work during this period, but I have extended free school meals to more groups of children than any government in the past 50 years,” she said.

When pressed by the presenters on whether she was not being “disingenuous” about her role, Ford said: “Vulnerable children have been my complete focus throughout this whole year of the pandemic.”

“It’s great to have Marcus’ support on projects we were already focusing on. We had a £1 billion election manifesto commitment to the child care element, for which we have run pilot programs like the ‘Holiday Activities & Food’ scheme that is being rolled out across the country this year,” she added.

The comments immediately prompted a wave of public anger on social media sites as people called out Ford for “brazen lying” and “claiming credit” for Rashford’s efforts.

Labelling Ford “arrogant and delusional,” Labour MP for Tottenham David Lammy tweeted that it was a “pathetic attempt to re-write history.”

No one will believe this dismissal of @MarcusRashford's campaign.

One user said it was a “disgusting display of gaslighting,” while others ran with the comments to list Ford’s ‘achievements’, including building the Stonehenge monument and being the first person to walk on the Moon. There were also plenty of jokes about how Ford, and not Rashford, would not be fit for England’s football World Cup qualifier against San Marino Thursday night.

An incredible insult to those such as Marcus Rashford who fought hard on his campaign on Free School Meals by Tory minister Vicky Ford. A disgusting display of gaslighting. Shame on you. https://t.co/qmEUdBjrw1

Next time you're at Stonehenge, look carefully and you'll see the name of the builder who single-handedly put together the magnificent monument carved on one of the stones:

As you can see here, Vicky Ford was still doing everything she could while being interviewed this morning to be fit for tonight’s World Cup qualifier against San Marino. pic.twitter.com/HZjgUUkufm

Twice over the past year, the footballer – who has said the scheme had been a lifeline for his family – had intervened to persuade Boris Johnson’s government about the need for continued funding for the program. Nearly 1.4 million school children in England – about 17.3 percent of state-educated pupils – were eligible for free school meals as of January 2020.

Rashford had petitioned the government that the number of children with uncertain access to food had grown due to families losing income as a result of pandemic-related restrictions. The months-long ‘hidden poverty and hunger’ campaigns had prompted two highly public policy U-turns.

In November, just weeks after 322 Conservative MPs voted down an opposition motion to extend the scheme during holiday periods till Easter 2021, the government announced £170 million of extra funding through the Covid Winter Grant Fund. That came after a similar about-turn last summer from Downing Street on £15-a-week food vouchers for students from poor and low-income families.

The footballer had also prompted an official review of the scheme after he shared pictures from families who had received “unacceptable” meal replacements for their children. Frantic parents shared pictures of potatoes and cans of beans, a loaf of bread and a block of cheese or boxes of cold chips after expecting enough food for a week’s worth of lunches.

‘What is this, 1998?’ Twitter users astonished that Tony Blair is opining on Covid roadmap… and MEDIA COVERS IT as ‘news’

Brexit to blame for disruption of food supply in N. Ireland, says Irish FM, amid reports of ‘bare’ shop shelves