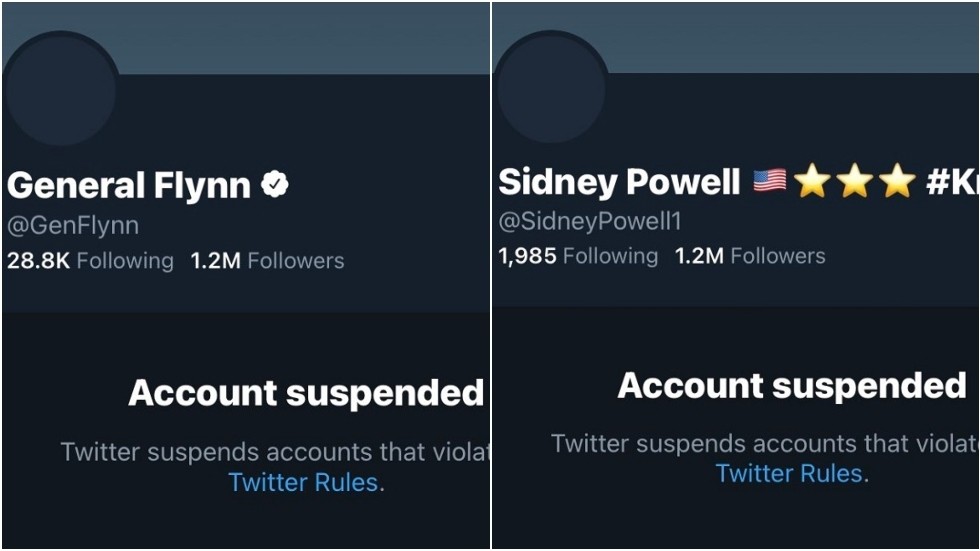 Former top US military spy and Trump adviser General Michael Flynn and lawyer Sidney Powell were among those purged from Twitter, amid what appears to be a campaign to deplatform anyone who dared challenge 2020 election results.

Twitter gave no official reason for suspending the accounts, as is their standard policy, but NBC News reported it was a “purge” of “high-profile supporters of President Donald Trump who promoted the QAnon conspiracy theory,” in an article by Ben Collins and Brandy Zadrozny.

Powell is best known for her ‘Kraken’ lawsuits alleging that machines by Dominion Voting Systems changed votes from Trump to Democrat Joe Biden in the November election. The Trump campaign officially distanced themselves from her in December, preferring to challenge the legality of election procedures and administration in several states. The courts refused to hear any of the lawsuits, however.

Dominion announced on Friday they were suing Powell for defamation and seeking $1.3 billion in compensatory and punitive damages. In one of her last tweets, she responded she was “retracting nothing” and that “We have evidence They are fraud masters!”

Powell had previously defended Flynn in the case brought by special counsel Robert Mueller’s prosecutors in connection to their ‘Russiagate’ probe. Flynn pleaded guilty of lying to the FBI about his conversations with the Russian ambassador during the Trump transition, but the Justice Department eventually dropped the charges after Powell’s motions uncovered evidence that the charges were baseless.

Flynn was also removed from Twitter on Friday, presumably for his support of Powell and her claims the 2020 election was stolen. Social media companies have initially labeled any such claim as “disputed” by official sources, but have since begun banning such content altogether and deleting its authors as well.

Wednesday’s events at the US Capitol, when a crowd of Trump supporters broke into the building and disrupted the joint session of Congress as it debated certifying the election for Biden has been characterized as “insurrection” or “sedition” by mainstream media, Democrats and a slew of corporations, while the incoming Biden administration has floated the idea of a crackdown on ‘domestic terrorism.’

Democrat activists have also demanded Apple and Google deplatform alternative apps such as Parler, where Flynn and Powell also have accounts, accusing it of helping “incite” the “violence” at the Capitol.

Flynn and Powell aren’t the only ones being purged from Twitter, either. Ali Alexander and Michael Coudrey, who organized “Stop the Steal’ rallies across the US, were banned on Wednesday shortly after the Capitol incident. Lawyer Lin Wood, who went even further than Powell in making claims about the election, was banned the next day.

Even ‘Techno Fog,’ a Twitter account that devoted most of his time analyzing ‘Russiagate’ documents and the prosecution of Flynn, was removed on Friday. There was no explanation for the move, as usual, but merely the association with Flynn via his case may have been enough of a pretext.

Absolutely bizarre, @techno_fog was not involved in any of the Q/Kraken shenanigans, 95% of his work was legal analysis of the Flynn prosecution https://t.co/F2BW9FpGaR

Earlier in the day, Facebook banned Brandon Straka and his WalkAway campaign – a movement of disillusioned Democrats who crossed to the Republicans during the Trump presidency, and were in no way involved in Wednesday’s protest. Over 500,000 members and “hundreds of thousands of testimonial videos and stories” were snuffed out in a click, Straka said.

Donald Trump vs Dr. Fauci Disagreements over the lockdown