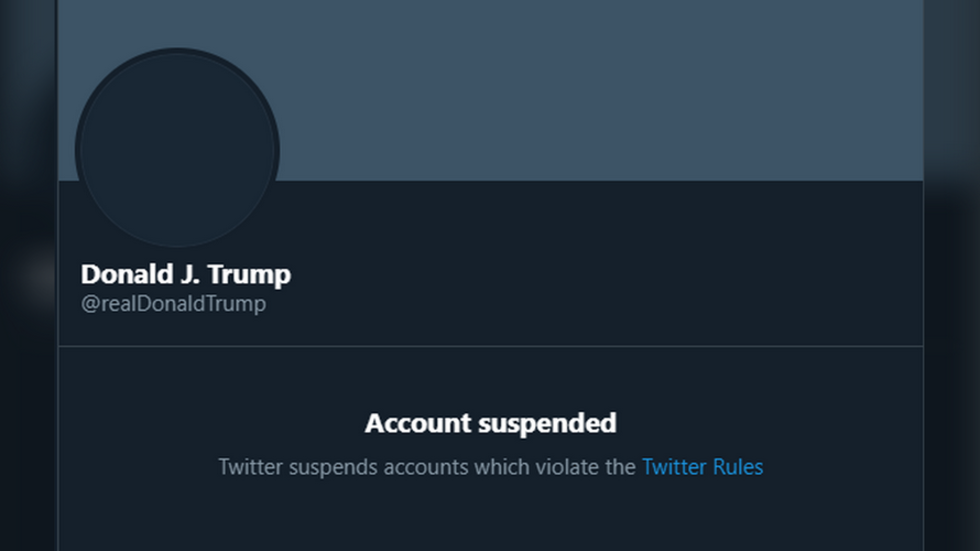 US President Donald Trump’s Twitter account has been ‘permanently suspended,’ that is banned. The company said there was a risk of violence because of how his tweets were being ‘interpreted’ off platform.

“After close review of recent Tweets from the @realDonaldTrump account and the context around them — specifically how they are being received and interpreted on and off Twitter — we have permanently suspended the account due to the risk of further incitement of violence,” the company announced in a blog post on Friday evening.

After close review of recent Tweets from the @realDonaldTrump account and the context around them we have permanently suspended the account due to the risk of further incitement of violence.https://t.co/CBpE1I6j8Y

As the offending tweets that triggered the ban, Twitter cited Trump saying he would not go to the inauguration of Joe Biden, and that the 75 million American patriots who voted for him “will not be disrespected or treated unfairly in any way, shape or form!!!”

These tweets “must be read in the context of broader events in the country and the ways in which the President’s statements can be mobilized by different audiences, including to incite violence, as well as in the context of the pattern of behavior from this account in recent weeks,” Twitter said, saying they decided these messages amount to “glorification of violence.”

Trump’s refusal to attend the inauguration “may also serve as encouragement to those potentially considering violent acts that the Inauguration would be a ‘safe’ target, as he will not be attending,” Twitter said.

“The use of the words ‘American Patriots’ to describe some of his supporters is also being interpreted as support for those committing violent acts at the US Capitol,” according to Twitter.

The company also claimed there were “plans for future armed protests… including a proposed secondary attack on the US Capitol and state capitol buildings on January 17, 2021” and that Trump’s statements could be seen as support for them.

The company’s determination is that “the two Tweets above are likely to inspire others to replicate the violent acts that took place on January 6, 2021, and that there are multiple indicators that they are being received and understood as encouragement to do so.”

Twitter had locked out Trump from his account on Wednesday evening, after he posted a message calling for his supporters to peacefully disperse, saying that his reference to the “stolen” election was incitement of violence. The suspension was reversed later that evening, as the president gave a concession speech committing to peacefully surrendering power to the Democrats on January 20.

Mainstream media outlets and the Democrats have accused Trump of “inciting insurrection” and “sedition” over Wednesday’s events, when a number of his supporters peeled off from a rally in Washington, DC to storm the US Capitol while Congress was in session to certify Biden’s election. Trump and the White House have repeatedly condemned and disavowed those protesters, to no avail.

Twitter first censored Trump in May, also citing the “glorification of violence” policy, when the president offered to send the National Guard to crack down on violent riots in Minneapolis, Minnesota.

After that, Twitter began tagging Trump’s posts protesting the potential for fraud in mail-in voting – which was the official conclusion of several US government commissions in years past – with a “pre-bunking” tag about how it was absolutely safe and secure. Trump’s claims about election irregularities were likewise labeled as “disputed” by official sources such as media fact-checkers.

Already a prolific Twitter user before his 2015 announcement of presidential candidacy, Trump leveraged the social media platform to address Americans directly, bypassing mainstream media gatekeepers. His surprise victory over Hillary Clinton in 2016, however, led to Democrats demanding a crackdown on “misinformation” on social media. The platforms hastened to oblige, first purging what they said were ‘Russian bots and trolls’ and later anyone whose opinion they disapproved of.

According to publicly available records quoted by US mainstream media, as much as 90 percent of donations by employees at Silicon Valley companies in the 2020 campaign went to Democrats.

‘The law of football’: Mbappe thanks Tuchel but PSG still haven’t made official announcement on sacking as fans demand Pochettino