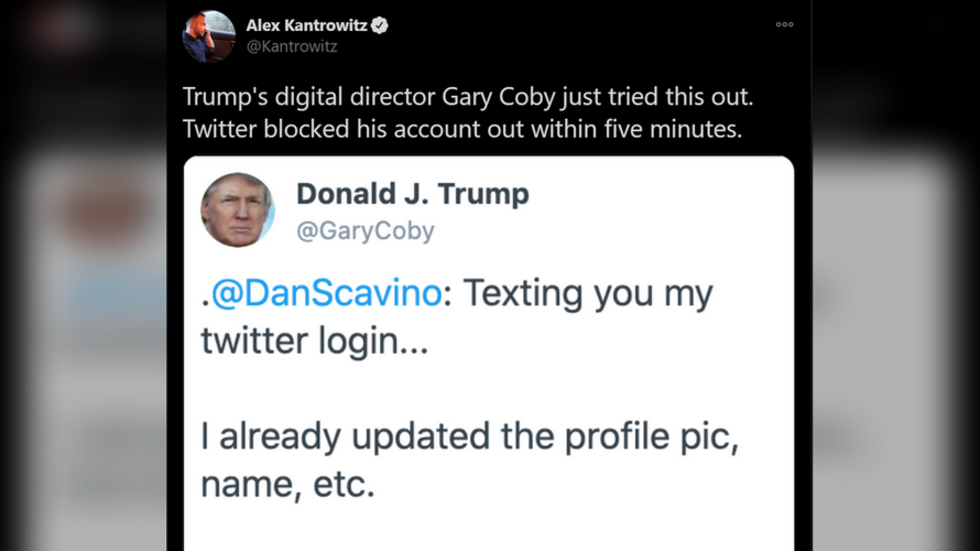 Gary Coby, the digital director for Donald Trump’s 2020 campaign, has been kicked off Twitter after reportedly making his account available to the US president, following Trump’s permanent ban from the platform.

Coby received a suspension after apparently offering his account to White House social media director Dan Scavino. In a public message tweeted at Scavino, Coby suggested that he had made changes to his profile that would allow Trump to immediately begin tweeting.

“Texting you my Twitter login,” he wrote to Scavino. “I already updated the profile pic, name, etc. Feel free to use!”

This was Coby’s last update pic.twitter.com/IyqFmRo7gQ

The account was banned shortly after. The ‘Trump War Room’ Twitter account, which is managed by the president’s 2020 campaign, said Coby was “clearly joking” and did not actually provide the president or one of his aide’s with his account login.

“He changed his name and profile pic to mock Twitter after they suspended @TeamTrump for posting the same presidential statement that reporters tweeted from the pool report,” the message said.

Gary Coby was clearly joking, he was not giving the president his twitter account as some claimed.

He changed his name and profile pic to mock Twitter after they suspended @TeamTrump for posting the same presidential statement that reporters tweeted from the pool report. https://t.co/BWfm8GLVcD

Earlier, a statement from Trump had been posted to @TeampTrump, the official account of the 2020 campaign. Twitter suspended the handle a few minutes later. Messages from Trump were also published on an official government account, @POTUS, but they were quickly removed from the platform.

Trump received a permanent ban on Twitter on Friday, preventing him from using his personal handle, @realDonaldTrump. Twitter has stated that any attempt to evade the indefinite suspension would be against its terms of service.

The US president called the move an attack on free speech perpetrated by the “Radical Left” and said he was working on moving to a different platform, or perhaps even making his own.

Jacqueline Fernandez's Childhood Pic Gets A Whole Lot Of Love From Preity Zinta, Yami Gautam And Other Celebs