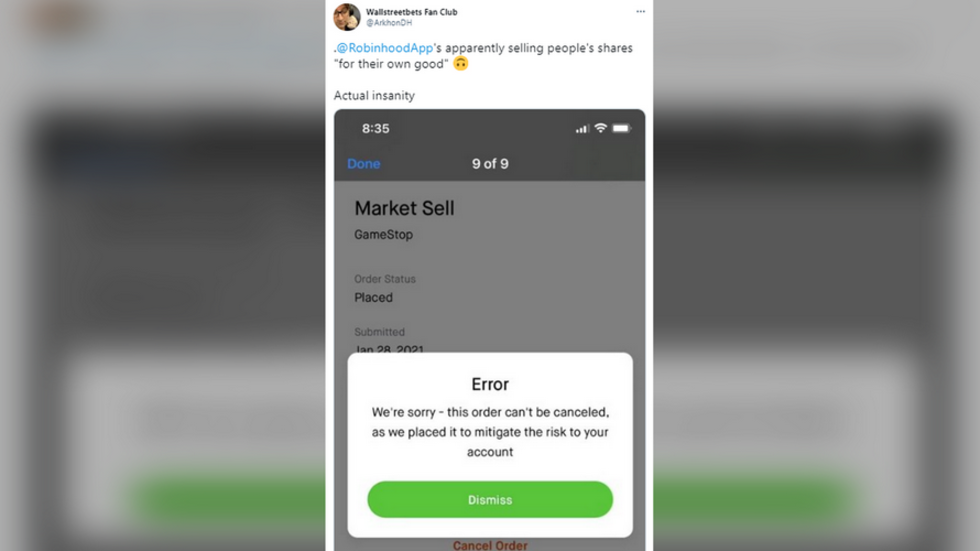 After forbidding its users from buying several volatile stocks, including shares in GameStop, trading app Robinhood was allegedly caught selling its users’ stocks against their will, and in doing so hammering down their value.

Twitter users on Thursday reported seeing their GameStop shares sold and their positions closed, with Robinhood justifying the sale due to “unreasonable risk.”

Robinhood literally closing out positions against the user's will in $GME.

I'm sure they have something in their ToS about this, but wow. pic.twitter.com/M0juagPLfB

Traders who attempted to cancel the sale were met with a message telling them the sale couldn’t be undone, “as we placed it to mitigate the risk to your account.”

At this point even if what @RobinhoodApp is doing with force-sells of $GME is *technically* legal due to the terms of their user agreement, they've torched any trust with their user base. Who would put money into a trading platform they don't trust?

Earlier in the day, Robinhood banned the buying of $GME, $AMC, $BB and $NOK (GameStop, AMC Theaters, Blackberry and Nokia) stocks, after small-time traders snapped them up, inflated their value, and got rich while inflicting devastating losses on Wall Street hedge funds, who had gambled a fortune on these companies’ decline.

Robinhood’s users were outraged and accused the company of “market manipulation,” but even after a class action lawsuit was filed against Robinhood, the app’s team seemingly went a step further and began selling its users’ shares without their consent.

Nothing like closing out retail investor's positions to defend the hedgies. All in a day's work for Woke Capital! pic.twitter.com/8nw5JtQS65

The alleged forced sales came after many of the amateur traders who drove GameStop’s share value from around $18 in December to more than $450 on Thursday morning refused to sell of their own accord.

Had they sold when Robinhood banned buying, the market would have become flooded with shares that would have decreased in value, given fewer customers would have been able to buy them.

So, Robinhood is a scam. They’re protecting the hedge funds, allowing them to close out their shorts at a lower price by preventing Robinhood customers from buying more of the stock which is causing the prices to drop. https://t.co/TjyFGsjKI9

The forced sales apparently had the same effect. GameStop’s stock price rallied from around $240 before users started receiving the notifications to $430 as the apparent sell-off began, before plummeting back to around $220 afterwards. At time of writing, Robinhood had not officially acknowledged the reported automatic sales.

The lower the value of the stocks in question, the less money short-selling hedge funds lose when they buy back the shares they originally borrowed. Online, commentators have accused Robinhood of doing the bidding of Citadel Securities, a Chicago-based firm that handles a majority of the app’s trades and also bailed out Melvin Capital, a hedge fund brought to the brink of bankruptcy by the GameStop surge.

Across the board, the financial establishment has reacted with outrage to the surge in what previously were considered dead stocks. Industry insiders have taken to TV to decry the amateur investors, hedge fund billionaires have demanded the government intervene on their behalf, and investment firms have bailed out their short-selling colleagues who lost tens of billions of dollars when the stocks rose, instead of falling as they predicted.

Wall Street’s fury, however, has united multiple sides of the political compass in defiance. Democratic congresswomen Rashida Tlaib and Alexandria Ocasio-Cortez of the progressive ‘squad’ have called for Congressional hearings into Robinhood’s alleged “manipulation.”

When @AOC and @DonaldJTrumpJr are on the same side you know you fucked up @RobinhoodApp pic.twitter.com/y15FBqrUu9

However, Yellen has taken more than $800,000 in ‘speaking fees’ from Citadel. Asked on Thursday whether Yellen would recuse herself from advising President Joe Biden on the situation, Psaki did not answer yes or no, stating instead that Yellen is “one of the world-renowned experts on markets, on the economy,” and that “it shouldn’t be a surprise to anyone she was paid to give her perspective and advice before she came into office.”

Great question from Nandita Bose of Reuters to Psaki if Treasury Sec. Janet Yellen would recuse herself from discussions about #RobinHood seeing has how she's given paid speeches to the hedge fund Citadel. Psaki dodges b/c Yellen is "one of the world renowned experts on markets" pic.twitter.com/3paPVMv846

Capitol riots: A visual guide to the storming of Congress