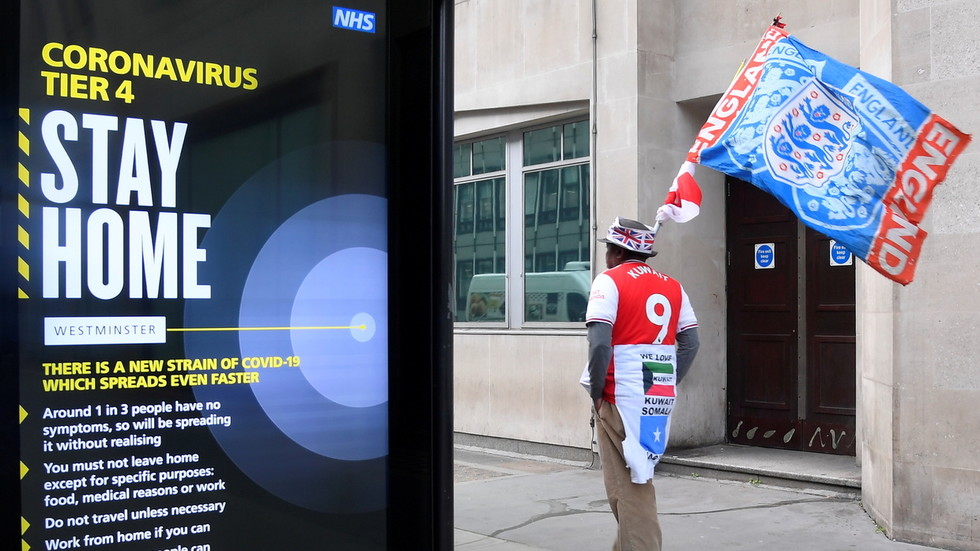 Britain’s health secretary has announced that an additional 20 million people in England will be subjected to Tier 4 restrictions as a new and highly contagious virus strain spreads throughout the UK.

Speaking to Parliament on Wednesday, Health Secretary Matt Hancock said the rising Covid-19 cases numbers and hospitalisations “demonstrate the need to act where the virus is spreading.”

Hancock announced that it had become necessary to expand the Tier 4 measures to a wider area, including the remaining parts of the South East of England, as well as large parts of the Midlands, north-east and south-west of the country. Tier 4 is the UK’s highest alert level for the pandemic and it means people should stay at home “unless you have a reasonable excuse.”

Liverpool and North Yorkshire, among other areas, will also move up to Tier 3. The changes will be effective as of 00:01 local time on Thursday.

As a result of the tier changes, a total of 44 million people will now be subjected to the toughest restrictions, equal to three-quarters of England’s population.

The health secretary concluded his statement to the Commons by saying “we must all stick at it during the difficult weeks ahead.”

“We end 2020 still with great challenges, but also with hope and confidence that in 2021 we have a brighter future ahead,” he added, in a reference to the approval of the British AstraZeneca vaccine.

Speaking earlier on Wednesday, Hancock told Sky News of the need to take “further action,” adding that the “challenge of suppressing the virus has got harder,” as the majority of new Covid-19 infections “are the new variant.”

On Tuesday, the health authorities registered 53,135 cases – the highest one-day figure since the pandemic began.

‘Cancel culture is like a medieval mob’: Mr. Bean blasts the woke brigade and social media giants for increasing polarization