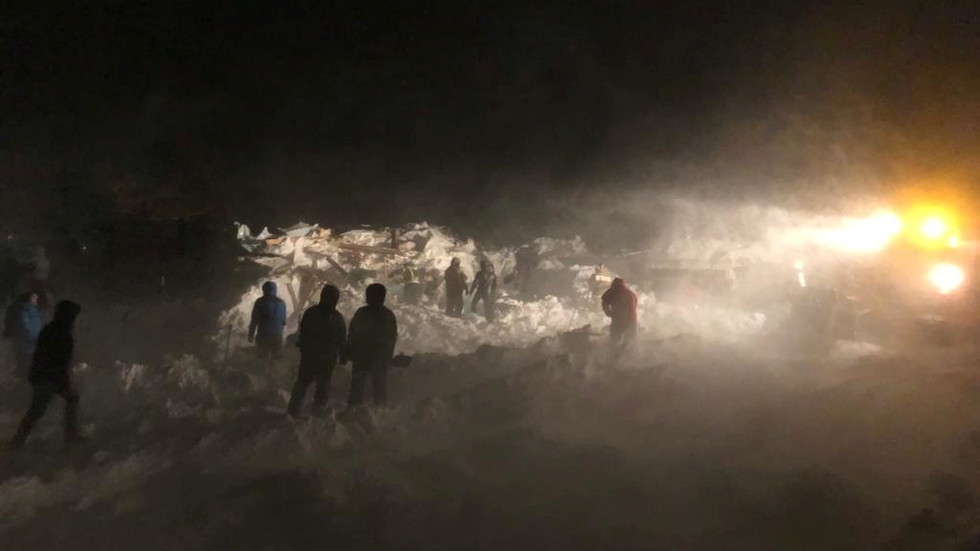 A massive avalanche has flattened several huts at a ski resort outside the Russian Arctic city of Norilsk, killing three people including a child. A teenager with frostbite has been rescued from under the snow mass.

The avalanche hit the Gora Otdelnaya (Separate Mountain) resort complex outside the city, which lies some 300km (190 miles) inside the Arctic Circle, late on Friday. The snow mass covered an area of around 300 square meters, crushing several huts that hosted skiers.

The incident prompted a massive overnight rescue operation, which involved more than 240 emergency workers and volunteers, as well as some 30 various vehicles. The operation was complicated by extreme weather conditions, heavy snow, and high winds in the area, Russia’s Emergencies Ministry has said.

Footage from the scene shows the rescuers digging through the snow at night, with the husks of the crushed huts visible in the background.

The rescuers managed to get a 14-year-old boy out alive from under the snow. The teenager, who suffered frostbite as well as other injuries, has been hospitalized. Three other people – two adults and a child, said to be the family of the injured boy – have been killed by the avalanche. The emergency workers have been able to recover their bodies and the rescue operation was declared complete, with all the people in the area accounted for.

Russia’s Investigative Committee said it has dispatched its officers to Norilsk to probe the incident. The investigators will look into potential violations of safety measures at the resort, as well as trying to establish who exactly owned the buildings crushed by the avalanche.

Inoculation nepotism? Tennessee health workers give Covid jab to friends after turning people away due to ‘miscalculation’

Showstopper: Illegal rave in France that started on New Year's Eve is finally brought to an end