Home > WORLD > ‘This is on you, Mr President’: Angry wrestling legend Mick Foley blasts ‘son of a b*tch’ Trump in plea to WWE boss Vince McMahon 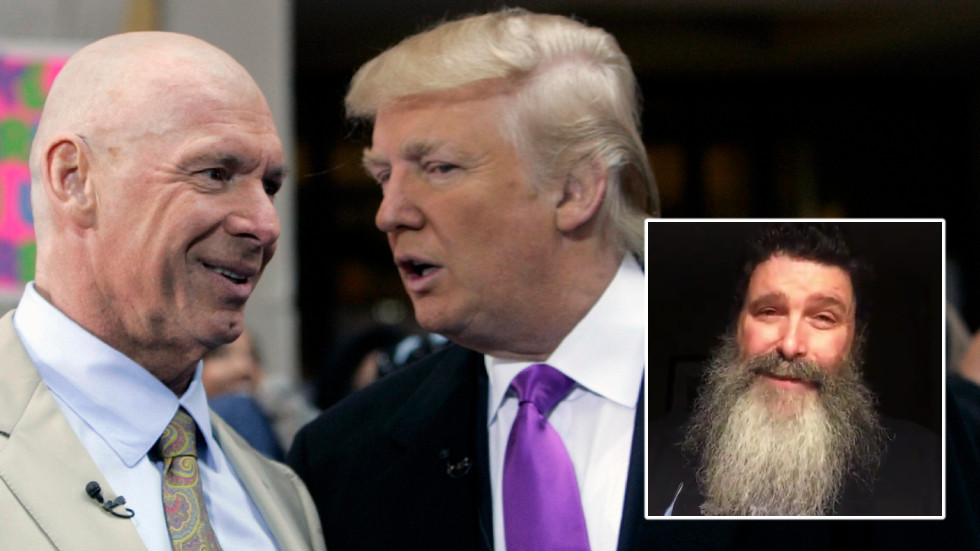 ‘This is on you, Mr President’: Angry wrestling legend Mick Foley blasts ‘son of a b*tch’ Trump in plea to WWE boss Vince McMahon

Donald Trump is to blame for violence inflicted on police during the shocking protests at the US Capitol and should be dumped from the WWE hall of fame, wrestling legend Mick Foley has urged in a series of political tweets.

American veteran Foley was inducted into the WWE Hall of Fame in 2013, the same year that CEO Vince McMahon honored Trump, who has since hosted his fellow billionaire businessman at the White House.

Four people died in chaotic scenes at the US Congress on Wednesday, when pro-Trump protestors mobbed Washington to protest against the presidential election result in a demonstration that was encouraged by the outgoing head of state.

“Hey, Vince – how about throwing this sorry son of a b*tch out of our Hall of Fame?” asked a clearly furious Foley, telling the government to invoke the 25th Amendment that would temporarily oust Trump on the basis of the defeated Republican being unable to perform his role.

This is on you, Mr President. Every single injury today is on you. https://t.co/6wJKb0pUxa

Hey Vince – how about throwing this sorry son of a bitch out of our Hall of Fame?@VinceMcMahon

2) Any chance of working a quick #Article25 vote into today’s agenda?

McMahon seems unlikely to denounce or punish Trump given that the sports mogul took part in an event, dubbed The Battle of the Billionaires, in 2007 in which he allowed Trump to tackle him to the ground and shave his head.

The former wrestler also gave millions to Trump’s 2016 campaign and his now-defunct foundation, according to Politico.

Foley also likened senate leader Mitch McConnell and vice-president Mike Pence’s resistance to Trump’s direction to challenge the election result to a classic wrestling match between Sgt. Slaughter and The Iron Sheikh in 1984.

Wait, is he really in the wrestling hall of fame? Time for him to go – thank you for speaking up, king.

YES! YES! YES!!! He deserves ZERO part of the great legacy of @WWE and its history! Please, @VinceMcMahon listen to Mick! pic.twitter.com/pd0geYnx4S

“I went back to December 13 on President Trump’s Twitter timeline,” said the 55-year-old, looking ahead to Joe Biden’s imminent inauguration on the day that Trump was sanctioned by Twitter, Facebook and Instagram for spreading misinformation.

“I did not see a SINGLE hint of compassion for the families of the 50,000 Americans who have died from Covid since that day.

Exactly Mick, and thank you for having the testicular fortitude to flat out say what pretty much every fan is thinking, and has thought for a ling time.

I went back to December 13 on President Trump's twitter timeline…

I did not see a SINGLE hint of compassion for the families of the 50,000 Americans who have died from COVID since that day.

The President seems incapable of compassion.

Thinking of all of you under lockdown in the UK – and wishing you the very best during a difficult time.

Foley went on to retweet a message by Steve Schmidt, the Republican aide who has worked on campaigns for the likes of former president George W Bush, describing the riots as a “profound national humiliation” that had turned the US into a “banana republic”.

He also echoed a statement from broadcaster Peter Rosenborg saying: “If these were Black Lives Matter protestors, we would be witnessing a bloodbath. Racist white supremacy privilege at its finest today.”

Earlier in the week, Foley had offered a message to his fans on the other side of the Atlantic as they entered lockdown for a third time during the pandemic.

“Thinking of all of you under lockdown in the UK,” he announced. “Wishing you the very best during a difficult time.”

LA hospital workers balk at taking Covid-19 vaccine, media says they're somehow not ‘IN TUNE’ with science & Trump is to blame

Nasa Mars rover: The moment Perseverance made its landing