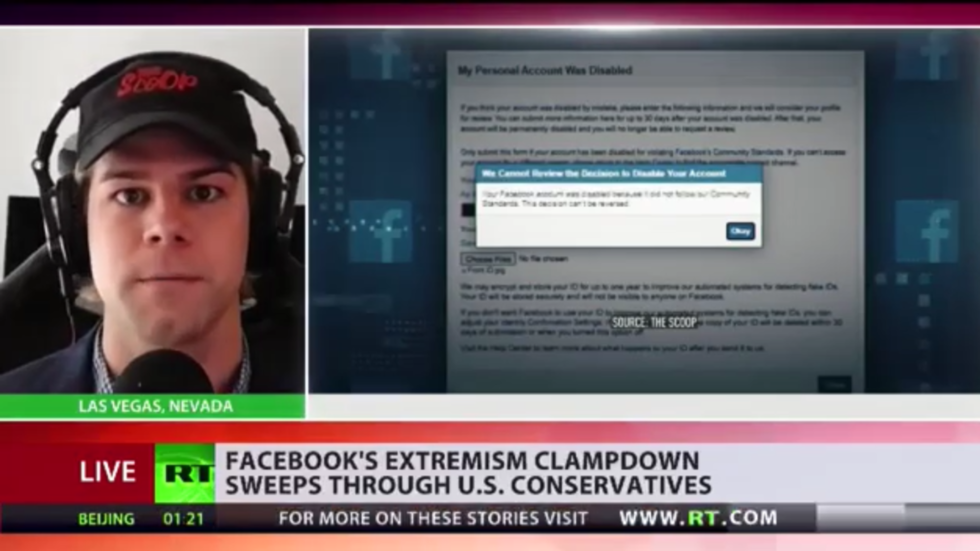 Steeve Strange – co-founder of the conservative news site ‘The Scoop’, whose personal page was banned on Facebook over an anti-Biden group – told RT that he flouted no rules and was swept up in a broader anti-conservative purge.

Facebook permanently disabled Strange’s account together with that of The Scoop’s other co-founder, Cameron Shizznit, for violating “community standards” earlier this week.

It came shortly after the Mark Zuckerberg-owned platform yanked the duo’s group, called “Patriots Against Joe Biden.” In a message justifying the deletion, Facebook said that any “pages that are hateful, threatening, or obscene” cannot be allowed on the site.

In an interview with RT on Tuesday, the company’s CEO, Strange, rejected the charges, saying that he had been watching carefully to ensure the group, which swelled to some 2 million members in about a fortnight, was not in breach of the site’s rulebook.

Noting that the ‘Patriots Against Joe Biden’ was set up “several days after” the January 6 Capitol riot, he said that they “had a strict clause in the ‘about’ section of the group” declaring that it was “about peace,” against “all violence” and welcomed anyone ready to engage in “civil debate.”

The group’s content was far from extreme and rather benign, Strange claimed, saying that it was “pretty much Trump supporters posting selfies and people posting funny memes.”

He said that unlike “most conservative news organizations” that have more room to maneuver, and “kind of push the line of what they can post,” his page was a smaller one and relied on the established social media companies like Facebook to “make money” and therefore was forced to toe the line.

We did not see anything that was threatening or obscene. We had a very strict policy

Strange said both he and Shizznit had “barely got any strikes” on their pages, claiming the removal of the anti-Biden group was the first time they ran into any kind of trouble with the social media giant.

“This was pretty much our first warning and we were taken down,” he said, alleging that Facebook was only waiting for a pretext to crack down on the page openly critical of the new president.

In my opinion, that was nothing that we did that was wrong. I think it’s just because the social media companies want to defend Joe Biden…and they are using this as coverage to just purge all conservatives on social media

While denouncing the ongoing media crackdown, which has predominantly targeted conservatives so far, Strange said that he believes the arrival of social media did give rise to “charged-up rhetoric,” since the threat of physical altercation that “would keep things at bay” in real life is not present in the online realm.

But, although the problem is “very difficult,” banning social media users at will is not the answer, he stressed, noting that the banished users would find refuge on other platforms like Telegram, which has reported a surge in users amid the current purge.

Why Scientists Think UK Variant of Coronavirus Could be Deadlier

Did France's Emmanuel Macron break his own Covid rules?