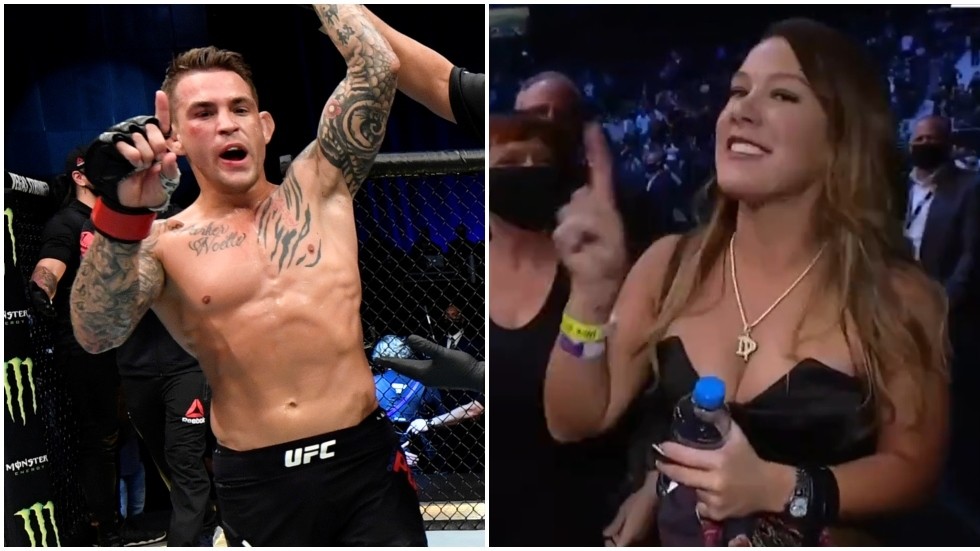 Jolie Poirier was among the 2,000 or so people lucky enough to watch the action at UFC 257 inside the Etihad Arena and did not go home disappointed after husband Dustin knocked out Conor McGregor in their rematch.

Poirier stopped McGregor with a barrage of shots midway through the second round of their lightweight contest on Fight Island in Abu Dhabi.

The victory meant the 32-year-old American exacted revenge against the notorious Irishman, who had finished him inside one round when the pair met back in 2014.

Delighted onlookers included wife Jolie, who was filmed shouting her joy from beside the Octagon.

"That's the last time you're going to doubt my husband!"

A special moment between @DustinPoirier and his wife Jolie…#UFC257 pic.twitter.com/kQAlPSEQLK

“I told you. That’s the last time anyone doubts my husband, I swear to God,” exclaimed the wife of the UFC star in a clip shared by BT Sport.

Poirier’s win means he is in pole position for a shot at the UFC’s 155lbs title, which is widely expected to be vacated by current champion Khabib Nurmagomedov following his retirement announcement last October.

The man Poirier could face in a duel for UFC gold is fellow American Michael Chandler, who made his promotion debut with an explosive first-round win against durable New Zealander Dan Hooker in the co-main event on Fight Island.

Poirier has suffered just two losses inside the UFC octagon in 14 fights since his loss to McGregor just over six years ago.

He rose to interim lightweight champion status when he beat Max Holloway in April 2019, but would go on to lose the unification bout against undefeated Russian star Khabib.

But after a win against Dan Hooker and now revenge against McGregor, ‘The Diamond’ is impossible to ignore in the title conversation and looks sure for a shot at gold later this year.

McGregor had also be joined by his partner Dee Devlin at the Etihad Arena, although the pair left with contrasting emotions after the former two-weight champ was beaten for a second time in his past three octagon appearances.

The build-up to the bout between McGregor and Poirier had been a far cry from the antagonism of the pair’s first fight.

McGregor pledged a $500,000 charity donation to Poirier’s ‘Good Fight Foundation’, while Poirier presented the Irishman with a bottle of his own-brand Louisiana hot sauce on the eve of the bout.

In keeping with that tone, McGregor was gracious in defeat, praising his opponent but also angling for a trilogy fight between the pair.

Poirier and wife Jolie have a four-year-old daughter together, Parker Noelle, and the fighter was seen kissing a photo of her after his victory.

Climate change: 2020 in a dead heat for world’s warmest year