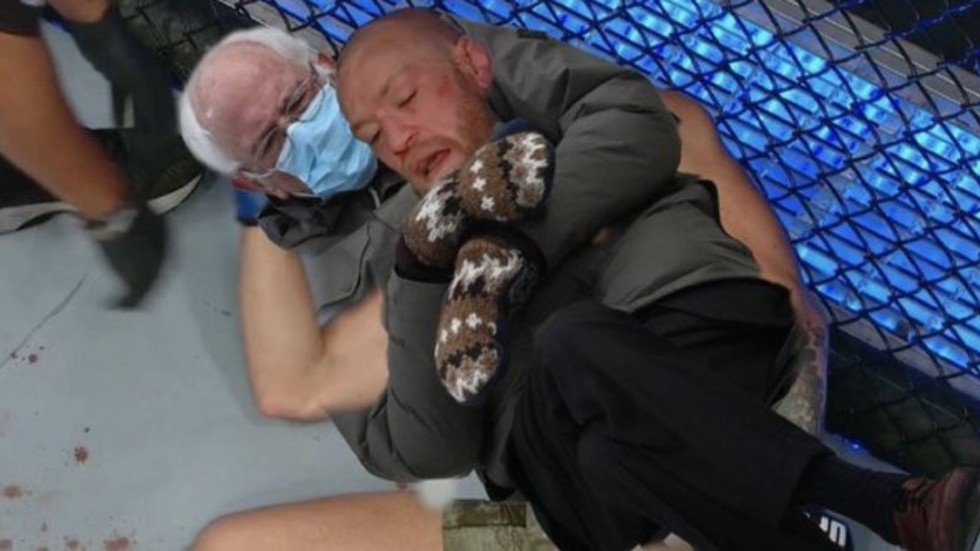 'The internet is undefeated': Trolls take aim at Conor McGregor with mocking Bernie Sanders memes after his UFC 257 defeat

When you make your career by trash-talking your opponents, it should come as no surprise when the haters come out of the woodwork when you lose, and they were out in force after Conor McGregor’s loss to Dustin Poirier at UFC 257.

McGregor was finished in dramatic fashion by Dustin Poirier in the second round of their main event bout at UFC 257 in Abu Dhabi, prompting social media to catch fire with trolls and hating fans taking the opportunity to laugh at the Dubliner’s misfortune.

Some even hopped on the current trend of using the now-infamous pic of US Senator Bernie Sanders at Joe Biden’s presidential inauguration to mock McGregor, who suffered the first knockout loss of his MMA career.

One fan served notice on McGregor by posting a pic of Sanders hugging an unconscious McGregor, stating the adage that “The internet is undefeated.”

Another asked, “How will Conor McGregor ever come back from this? Money can’t delete these memes, man.”

How will Conor McGregor ever come back from this man? Money can't delete these memes man 😂 #UFC257 pic.twitter.com/nz6uXGztJD

McGregor after getting KO’d by Poirier pic.twitter.com/e0TtF9vgu4

'for the best night sleep in the whole world…it's my pillow dot com! Especially after an all day binge of Proper Twelve @TheNotoriousMMA #UFC257 pic.twitter.com/SAZ4fgUCSX

Clocking in With A new Tattoo in a few days! What should I get Mcgregor in this pose? pic.twitter.com/oXLpfzPp05

Of course, McGregor’s victories have seen him raised to the heavens as his star power, and bank balance, have gone to stratospheric levels over the years.

But now, after his defeat to Poirier took his record over his last six bouts to three wins, three losses – with his three defeats all coming inside the distance – some fans are wondering if “The Notorious” will ever reach the heights that saw him capture UFC titles in two weight classes earlier in his career.

Germany To Use Corona Meds That Helped Donald Trump

China’s Baidu and Geely partner up for smart cars

‘We need more public diplomacy, not less’: McFaul ‘saddened’ by US closing last two consulates in Russia outside Moscow