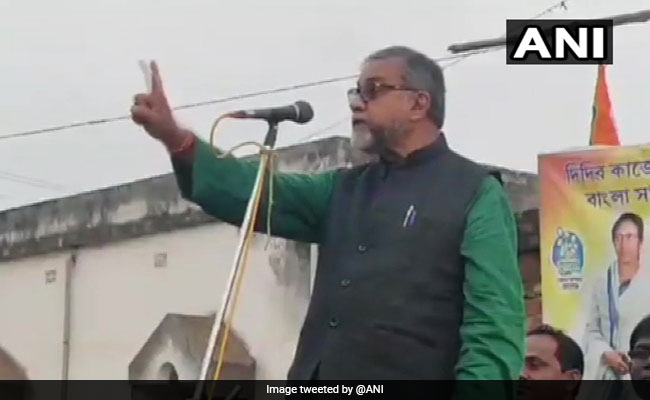 Elections for 294 Assembly seats in West Bengal are scheduled to take place this year.

West Bengal Minister of State for Parliamentary Affairs Tapas Roy has said that the Left-Congress alliance doesn’t have the strength to put up a fight against the BJP and claimed that only his party chief Mamata Banerjee can take them on.

The TMC MLA from Basirhat also indicated the Left-Congress alliance should join Trinamool Congress to contest the upcoming West Bengal Assembly polls to stop the Bharatiya Janata Party (BJP) from coming to power in the state.

Speaking at a public meeting in Bankura’s Onda on February 12, Tapas Roy said, the Congress and Left cannot put up a fight against the BJP alone that’s why they entered into an alliance.

“They (BJP) are saying that they will rule Bengal. I want to tell Congressmen and Left party leaders that Arup Khan (Onda TMC MLA) will join your procession. Congress and the Left can’t do it alone. You also know that this is not possible with your declining energy. That’s why you two have come together,” the TMC MLA said.

“Don’t stop Mamata Banerjee. Do not cut the canal and bring crocodiles. You also know that you do not have the strength to resist the Kapalik power (BJP). The name of the one who can is Mamata Banerjee. All BJP leaders are afraid of her,” he added.

Elections for 294 Assembly seats in West Bengal are scheduled to take place this year.

In the 2016 West Bengal Assembly elections, out of the 294 seats, Congress had managed to win 44 seats while the Left Front bagged 33 seats. The ruling TMC secured 211 seats and BJP had won 3 seats.

The BJP has emerged as a strong contender in the state after securing 18 Lok Sabha seats in the 2019 general elections.

Peter Mukerjea Pens Memoir, Says It's Not Intended To Open Can Of Worms

Twitter Chief Jack Dorsey Teams With Jay-Z To Back Bitcoin

Can Diabetics Replace Sugar With Honey? Here’s The Answer Revealed