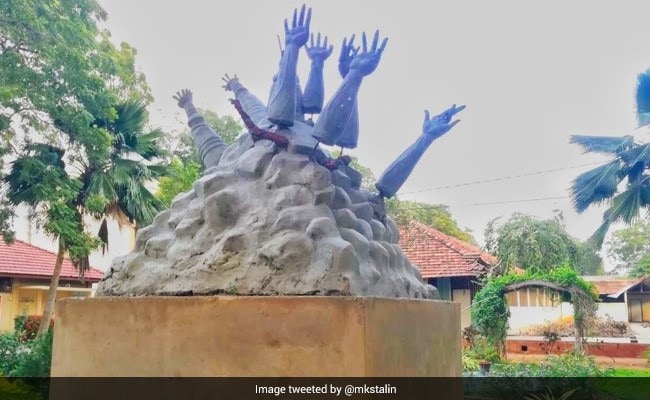 The monument was established in 2019 in the University of Jaffna.

Tamil Nadu Chief Minister Edappadi K Palaniswami, his deputy O Panneerselvam and DMK President MK Stalin among others on Saturday slammed the reported demolition of a memorial monument for Tamils killed in Mullivaikkal in Sri Lanka during peak hostilities in 2009.

The monument was established in 2019 in the University of Jaffna in memory of the civilian Tamils killed in one of the bloody episodes of the island nation’s last leg of the three-decade old conflict in 2009.

Mr Palaniswami said the demolition has pushed Tamils across the world into “grief” and blamed the Sri Lankan government for bringing it down.

“It comes as a big shock that the memorial pillar, set up in memory of university students and people killed mercilessly in Mullivaikkal in the final stages of the war in Sri Lanka has been demolished overnight,” the chief minister said in a tweet.

Mr Panneerselvam also took to Twitter to strongly condemn the demolition and said it came at a time when efforts were on to ensure justice for the ”hordes” of Tamil civilians killed in the “Ealam war.”

In a tweet, he tagged the twitter handle of the Office of the Prime Minister of India and said the PMO should “condemn this shocking incident.”

“This is the expectation of the Tamils globally,” he added.

PMK founder Dr S Ramadoss, in a tweet, called for India’s intervention in ensuring the livelihood of Sri Lankan Tamils, saying it should not “wash its hands” off their well-being.

India should “ponder over” how Tamils can live with equality and honour when even such a structure was not allowed to exist, he said, in an apparent reference to External Affairs Minister S Jaishankar’s recent remarks.

During his Sri Lanka visit, Mr Jaishankar had said on Wednesday that “it is in Sri Lanka’s own interests that expectations of Tamil people for equality, justice, peace and dignity within a united Sri Lanka are fulfilled.”

Tagging Mr Jaishankar in a tweet, Mr Ramadoss urged New Delhi to take up the matter with Colombo and ensure Tamils’ “right to life.”