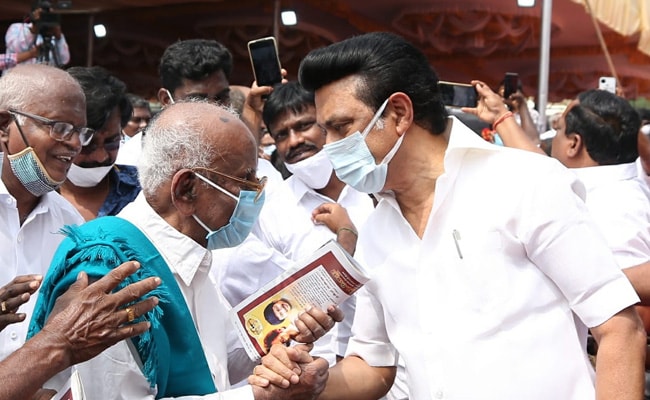 He is not yet the chief minister, but that hasn’t stopped MK Stalin, the DMK chief and Tamil Nadu’s Leader of the Opposition, from collecting grievances and petitions from the public and promising to solve them within the first 100 days of his government – if his party wins in May’s Assembly election.

Called “Stalin in your constituency”, this is the 67-year-old leader’s strategy for the state polls, and launched it today at the Thiruvannamalai constituency, which is around 200 km from Chennai.

His party issued application forms in which people could detail their problems and issues, and gave them an acknowledgment with Stalin’s personal assurance.

An old widow who had dropped her petition told Stalin: “I am also physically challenged. My two sons live separately. I need old age pension.”

Stalin replied: “The DMK will provide old age pension for all eligible people”.

Addressing a gathering at Thiruvannamalai, Stalin declared: “These are my demands, these are my expectations. We will give a dream government that people will like.”

He also targeted the ruling AIADMK on a multitude of issues, including corruption.

The AIADMK hit back by accusing the DMK of family politics.

In the 2016 election the DMK missed the bus with the AIADMK, then led by the late J Jayalalithaa, won a second term in defiance of a well-established trend in the southern state – a change of guard every five years.

The DMK, therefore, has been out of power for a decade. There was reason to cheer in 2019 though, with the party completed a near-total sweep in the Lok Sabha election, winning 38 of 39 seats in alliance with the Congress.

The AIADMK, led by “the accidental Chief Minister” – a reference to Edappadi K Palaniswami rising to power after Jayalalithaa’s death – is eager to keep its rival out of power for another five years.

Mr Palaniswami sees this election as more than a vote on his government’s performance. He sees it as a prestige battle in a race to make an impact in a state that is without two iconic leaders.

The 2021 Tamil Nadu election will be the first since the death of two former chief ministers – the AIADMK’s Jayalalithaa and the DMK’s MK Karunanidhi, who died in 2016 and 2018 respectively – left behind a massive power vacuum.

The state also has a new (potential) star in actor-politician Kamal Haasan, who is pitching his Makkal Needhi Maiam (MNM) as the party to be to deliver a honest government.

Three Rockets Hit Iraq Airbase Where US Troops Are Based: Officials