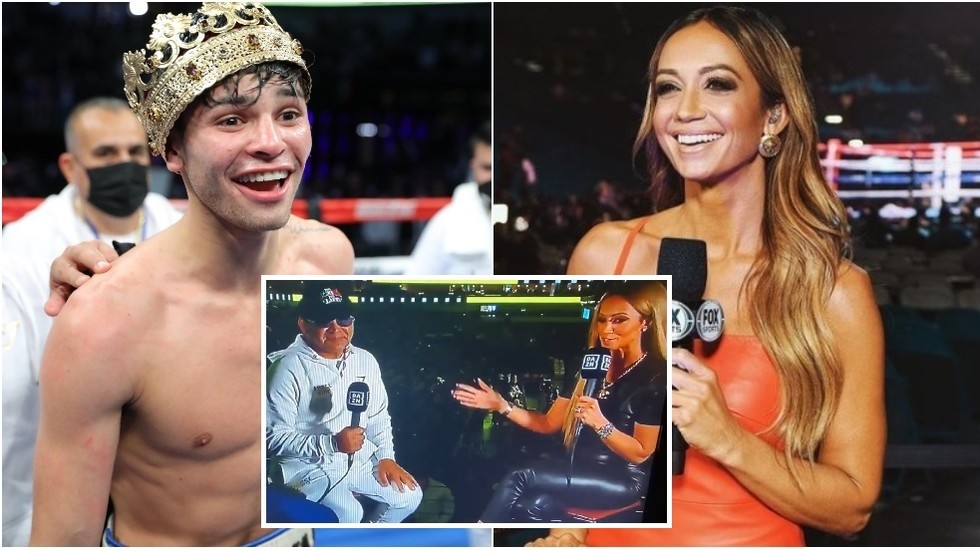 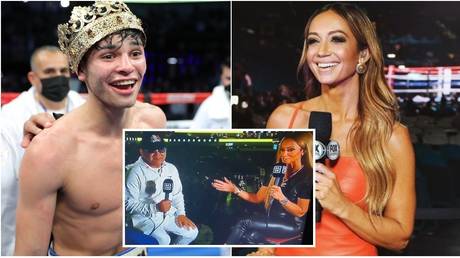 Boxing presenter Kate Abdo tickled social media after she complemented Henry Garcia – father of lightweight sensation Ryan Garcia – on his “good sperm” as he saw his two sons win on the same card on Saturday night.

Ryan Garcia, 22, recovered from a second-round knockdown to stop Britain’s Luke Campbell with a vicious body shot in the seventh round of their contest at the American Airlines Center in Dallas, cementing the American’s status as one of boxing’s bright young things.

Earlier on in the night, younger brother Sean Garcia extended his own unbeaten career with a majority decision win over Rene Marquez in their four-round lightweight bout.

The pair’s father Henry joined presenter Abdo for the DAZN broadcast between his sons’ bouts, where she paid him a cheeky compliment.

“You make them pretty, you make them athletic, that’s some good sperm you got there, Sir,” the pundit added as Garcia Sr smiled in reply.

The exchange was soon picked up by social media, where boxing analyst Brian Campbell described Abdo’s remarks as “one heck of a compliment.”

“It’s only January 2 and Kate Abdo already with the quote of the year!” joked boxing writer Dan Rafael.

Others were less impressed however, with one response claiming the comment was “cringey.”

The Garcia DNA. I'm not a father, but if someone told me I had "good sperm" I think I would walk away from the conversation. That's just cringey lol

Ryan Garcia certainly showed spunk of his own as he battled back from his second-round knockdown – the first of his career – when he was floored by a left hook from the 33-year-old Campbell.

The American fighter dominated the ensuing rounds before stopping the Brit with a perfectly executed body shot which left Campbell wincing in agony while down on one knee and unable to continue.

That’s some shot, took them all night respect to Luke Campbell. Hate him or love him Ryan Garcia hits hard pic.twitter.com/yvtWrRjZCe

The victory earned Garcia the WBC interim lightweight title and extended his unblemished record to 21-0, with 18 of those wins coming by way of KO.

After seeing off the challenge from Olympic gold medalist Campbell – who was seen as by far his toughest test to date – Garcia was hailed as “the real deal” after facing accusations of a thus far stage-managed career which was built on social media fame rather than ring prowess.

Ryan Garcia is the business 👏🏼 Had an inkling Campbell was a step to far, but he’s the real deal, great watch. #GarciaCampbell

“I think I showed a lot of people who I really am. I showed today I am special,” Garcia told DAZN.

“They wanted to show me as a social media fighter. Anybody who puts you down, remember you’re not who people tell you who you are – you are who you choose to be. I chose to be a champion tonight.

“He caught me, I was like, ‘I got dropped, this is crazy’. I’ve never been dropped in my life. I had to adjust. I knew I could beat him, I just had to get back up.”

You are not what they say you are, you are who you choose to be 👑 pic.twitter.com/MpPSOScbPy

Garcia, who is nicknamed ‘King Ry’ and had arrived into the ring being carried on a throne, used his post-fight interview to call out formidable fellow American Gervonta Davis, who boasts a perfect 24-0 record.

The defeated Campbell, who was stopped for the first time in his 24-fight career, praised Garcia as the hardest puncher he had ever faced and said the rising young star “had a massive future” ahead of him.

Trump impeachment: The debate that led to acquittal