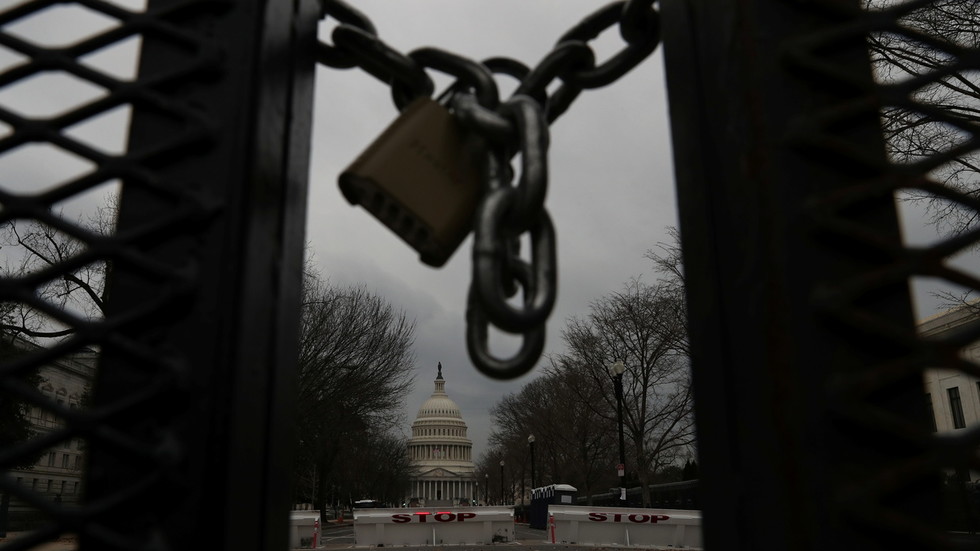 The US Capitol Police has called for permanent fencing and other beefed-up security measures in the wake of the January 6 riot, raising concerns the move will wall off the government from the American people.

“In light of recent events, I can unequivocally say that vast improvements to the physical security infrastructure must be made to include permanent fencing and the availability of ready, back-up forces in close proximity to the Capitol,” acting Capitol Police Chief Yogananda Pittman said on Thursday.

Her statement comes amid security reviews following the January 6 riot, when supporters of President Donald Trump breached the Capitol. Five deaths were attributed to the unrest, which the Democrats have described as an “insurrection.”

More than 25,000 National Guard troops were summoned to Washington for President Joe Biden’s January 20 inauguration, and non-scalable fencing was erected around the Capitol. Checkpoints also were set up, helping to seal off the government district like Baghdad’s Green Zone.

A week after the inauguration, about 15,000 Guardsmen remained in the city. The National Guard said 7,000 troops will still be deployed in Washington in the coming weeks, with the force expected to be drawn down to 5,600 by mid-March.

Pittman admitted in House testimony on Tuesday that police knew of the strong potential for violent protest on January 6 and weren’t adequately prepared. On Thursday, she said that experts going back at least as far as 2001 have called for increased security around the Capitol.

The perspective of fortified structures becoming a permanent fixture of Washington, DC, landscape, however, did not sit well with many, drawing bipartisan pushback.

Rep. Elise Stefanik (R-New York) argued that she was not made aware of any credible threat to the lawmakers to warrant such a fortification, tweeting she is “adamantly opposed.”

“There has been no threat briefing given to Members of Congress to justify this proposal,” she said.

This is the People’s House.

I am adamantly opposed. There has been no threat briefing given to Members of Congress to justify this proposal. https://t.co/4YzVRuD85b

Washington, DC Mayor Muriel Bowser, a Democrat, said that while “fencing and the presence” of troops will be needed in view of “some potentially volatile events” in the nearest future, she is against making such security arrangements permanent.

“We will not accept extra troops or permanent fencing as a long-term fixture in DC,” Bowser said.

1/ Based on conversations with federal partners, there are some potentially volatile events upcoming that will require extra security. Fencing and the presence of troops will be a part of that. But we will not accept extra troops or permanent fencing as a long-term fixture in DC.

“I sure hope it’s not permanent,” says Rep. Adam Schiff (D-Calif) in response to proposal to fence off Capitol grounds because of Capitol Police failures Jan. 6th. Do more than hope. Please. And thank you. @kojoshow @wcp pic.twitter.com/2YAprPbZbX

So did Democrat strategist Steve Pierce, troubled by the message a permanent fence would send.

“I’m still mourning that something like this has even become necessary at all,” he said.

This is a great thread from @kasie. As much as I value the safety of our leaders and my friends who work there, I’m also conflicted about the message a permanent fence around the Capitol sends — and I’m still mourning that something like this has even become necessary at all. https://t.co/7eY7cWqbsz

The proposal comes as Democratic lawmakers have sounded the alarm about their own safety inside the Capitol building.

House Speaker Nancy Pelosi (D-California) said members of Congress will likely need additional allowances to provide for their personal security in the Capitol, “when the enemy is within the House of Representatives – a threat that members are concerned about – in addition to what is happening outside.”

Pelosi and other Democrats, such as Rep. Alexandria Ocasio-Cortez (D-New York), have suggested in recent days that some of their Republican colleagues may try to kill them – or already have, insinuating that lawmakers who dared question the results of the 2020 presidential election were directly responsible for the January 6 riot.

How a joke ended up before Canada’s top court

Fresh from censoring select voices before and after US election, Twitter howls ‘HUMAN RIGHTS’ as Uganda shuts down social media

Covid-19: Which countries in Africa are administering vaccines?