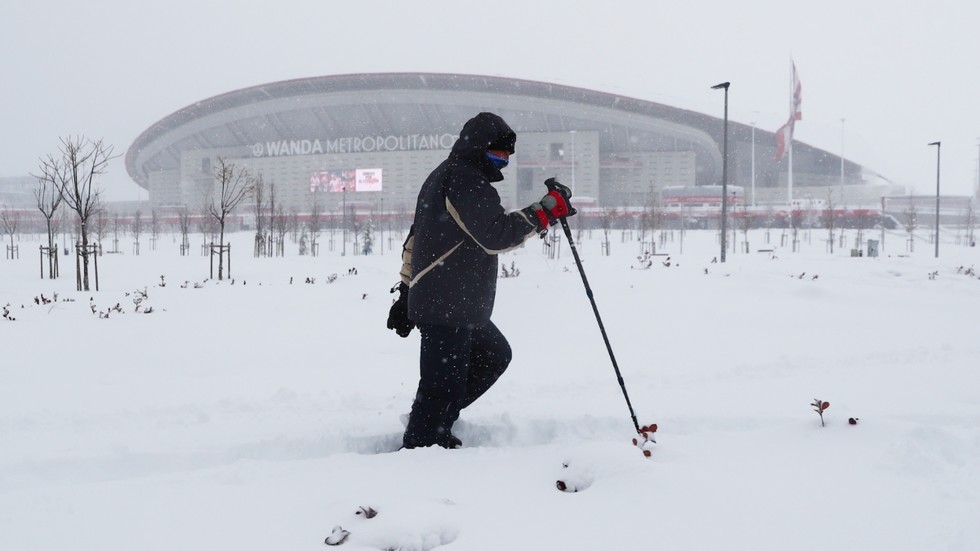 Matches in the Spanish top flight are rarely affected by adverse weather conditions, but this weekend’s slate of games in La Liga has encountered an unexpected foe – snow.

That’s right, one of the most popular European holiday destinations for sun-seekers is currently dealing with shock snowfall, with a rare blizzard already forcing the postponement of a major clash from this weekend’s matchlist.

Troops were called in to help rescue drivers trapped in their vehicles, as the snow from Storm Filomena caused huge problems across the country, and the nation’s top football clubs weren’t immune to the problems, either.

The La Liga clash between league leaders Atletico Madrid and ninth-placed Athletic Bilbao, scheduled for Saturday afternoon, has been called off due to the adverse conditions as the country struggled to deal with the unforeseen snowfall.

La Liga said it sought the postponement “given the exceptional situation caused by the storm across a large part of the peninsula … and the impossibility of having the pitch in optimal conditions.”

The conditions meant Bilbao’s plane was forced to turn around after being unable to land at Barajas Airport in Madrid.

The conditions prevented Athletic from traveling to Madrid and the plane carrying the squad was forced to turn back around after it was unable to land at Madrid’s Barajas Airport.

“Athletic Club would like to thank Atletico Madrid for their collaboration and willingness to find solutions during this difficult situation,” Athletic said in a statement.

The travel issues hit Segunda Division side Rayo Vallecano, too, with the club sharing pictures on its Twitter account as the club tried to battle through the snow to make it to their match at Deportivo Mirandes.