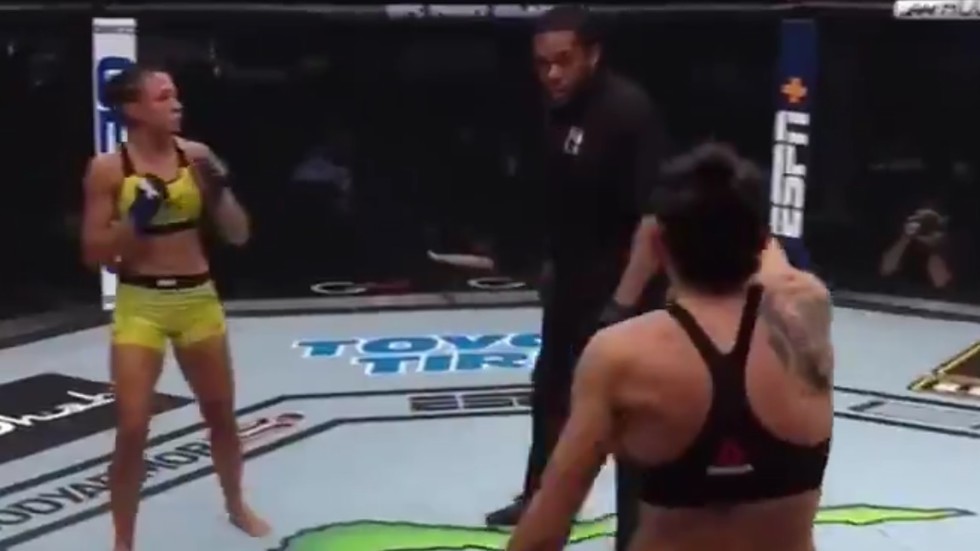 ‘She had to knock her out TWICE!’ Fans rage at UFC referee Herb Dean after crazy finish sees Rodriguez shock Ribas (VIDEO)

MMA fans hit out at referee Herb Dean after the bizarre ending to the strawweight clash between Amanda Ribas and Marina Rodriguez at UFC 257 on Fight Island.

Kicking off the main card at the Etihad Arena, Rodriguez pulled off an upset with a stunning second-round TKO of her fellow Brazilian – but it was a fight she had to finish twice after an apparent mix-up from Dean.

Rodriguez floored Ribas with a big right hand 30 seconds into the second round, following up with a ground-and-pound barrage which looked enough to end proceedings.

Referee Dean stepped in and appeared to call off the action – or at least that’s what Rodriguez thought as she wheeled away in celebration, albeit with Ribas still clinging to her leg.

As a dazed Ribas staggered to her feet, Dean indicated to a surprised Rodriguez that her night’s work wasn’t done.

The underdog then stepped in to land a nasty elbow and another big right hand on Ribas, leading to Dean waving off the fight for real.

Marina Rodriguez knocks out Amanda Ribas and walks out with the TKO win (+800) #UFC257 pic.twitter.com/6jPH92Go0Y

Fans were left confused and angry by the awkward conclusion in Abu Dhabi, laying the blame firmly at Dean’s door for the scenes.

Herb Dean stays messy with calling fights between Holloway/Kattar last weekend and now Rodriguez/Ribas. He's officiating the main event and I am so stressed about it.

I like Herb Dean, but his indecision when it comes to stopping fights is something that’s getting a bit out of hand. #UFC257

The defeat for Ribas was her first inside the UFC octagon, and snapped a four-fight win streak which many had tipped as leading to a potential title shot for the popular 27-year-old. It was also only Ribas’s second defeat in 12 professional bouts.

For the impressive Rodriguez it was a return to the win column after a defeat and a draw in her past two outings, and moved her overall record to 13 wins, 1 defeat and two draws.

🇧🇷 @Wmmarz takes care of business, not once but twice!

Sara Ali Khan, Holidaying In Maldives, Is "Living In The Moment"

On His Wedding Day, Here's A Pic Of Varun Dhawan Chilling With His Squad In Alibaug