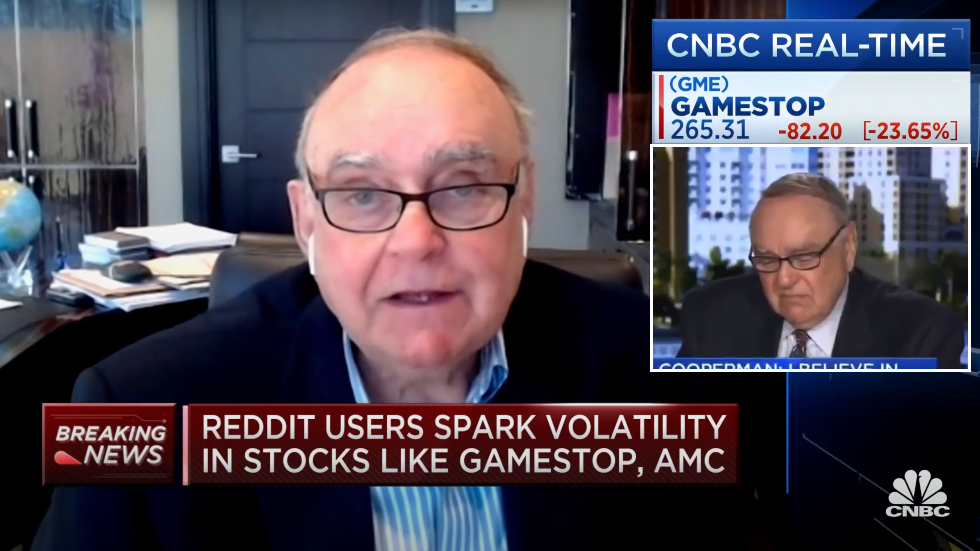 People “sitting at home getting their checks from the government, trading their stocks” are the problem, Leon Cooperman said on Thursday.

In a lengthy appearance on CNBC’s Fast Money: Halftime Report, the CEO of the New York-based Omega Advisors took aim at the small investors buying up stocks the “more knowledgeable” short-sellers had undervalued, blaming the Federal Reserve’s low interest rates and even the government’s coronavirus stimulus checks.

GameStop is overvalued because there are “speculators playing around,” said Cooperman, who added his hedge fund was not involved with the company one way or another. The Robinhood investing is a “losers’ game,” he added, and the people involved “have no idea what they’re doing.”

For the past week, small investors have been using brokers like Robinhood to buy stocks of GameStop and several other companies, having discovered that hedge funds had been “nakedly” short-selling them – borrowing over 100 percent of the company’s stock to bet on its failure – to make a profit. As a result, the hedge funds have taken over $70 billion in losses so far.

Earlier in the day, Robinhood actually blocked further purchases of GameStop and several other stocks, while leaving the option to sell them open – triggering a class action lawsuit in New York accusing the brokerage of “manipulating” the market.

Later in the show, Cooperman griped about the market conditions that led to this situation, denouncing calls from the ruling Democrats for the rich to pay a “fair share” in taxes.

“I hate that expression with a passion!” Cooperman said. “What does fair share mean?” He said he was willing to accept a marginal tax rate of 50 percent, but in places like California, Connecticut, New Jersey and New York “you’re already well past that.”

This fair share is a bullshit concept! It’s just a way of attacking wealthy people.

“This fair share is a bullshit concept," he shouts. "It’s a way of attacking wealthy people." pic.twitter.com/zFW6o1MFND

Cooperman famously cried in another CNBC performance, back in 2019, when he objected to the wealth tax proposed by Senator Elizabeth Warren (D-Massachusetts) as part of her primary presidential bid. Sen. Bernie Sanders (I-Vermont) even featured the segment in a campaign ad, which called Cooperman a “sad billionaire” unwilling to pay more in taxes.

Ironically, in the same appearance Cooperman had denounced President Donald Trump for not being “presidential” even as he praised his economic policies. On Thursday, he revealed he had voted for Democrat Joe Biden, whose administration is now contemplating a Warren-like tax plan.

For all their talk about standing up for the little guy against billionaires and bankers, both Sanders and Warren approved Biden’s nomination of former Fed chair Janet Yellen to head the Treasury. Yellen had pocketed over $800,000 in speaking fees from Citadel, the very same hedge fund that may have influenced its client – the brokerage Robinhood – to stop the buys of GameStop stocks on Thursday to stem the hedge fund losses.

Citadel has spent $240k per year lobbying Congress and the Treasury Department. https://t.co/nf5gHJ18o3

US-Mexico border: The gruesome attack that shocked a village

New Zealand rings in 2021 with fireworks