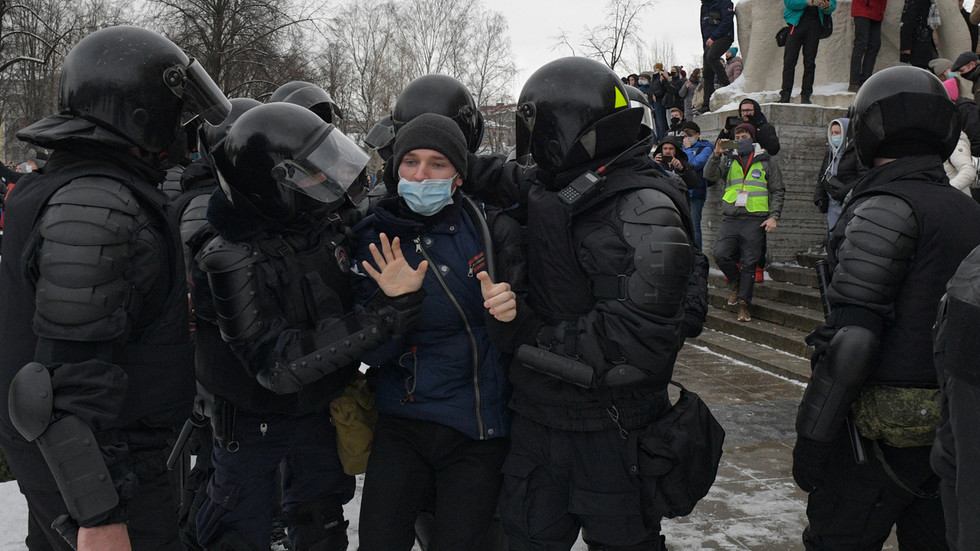 Russia’s second-largest city has seen a tense standoff between police and supporters of jailed opposition figure Alexey Navalny on Sunday, as footage emerged of violence and arrests for a second consecutive weekend.

In one clip, an officer can be seen drawing his service pistol after being punched and kicked by demonstrators, who were chasing a small group of policemen down a street just off Sennaya Square in St. Petersburg. The unverified video, published by the opposition-leaning Fontanka news site, has been shared widely online.

Another recording, obtained by the newspaper Novaya Gazeta, appears to show an unconscious man being carried onto a bus in the historic city center as police could be seen making arrests outside.

The opposition-leaning news outlet also reported that journalists wearing identifying yellow vests were detained by officers in riot gear. A video shows one being carried by their arms and legs to an awaiting van. There were also reports that a loud bang had been heard around one of the columns pushing against a line of police officers. Some local outlets claimed the police had deployed a flashbang grenade, while others said it was a firecracker.

St. Petersburg was the scene of some of the most violent clashes during the protests last weekend. Images of an elderly woman being kicked in the stomach by a policeman after she attempted to stop him making an arrest went viral online. Officials have since launched an inquiry into the incident.

Demonstrators have taken to the streets in cities across the country for a second consecutive weekend to demand Navalny’s release. The anti-corruption campaigner was jailed after landing at Moscow’s Sheremetyevo Airport earlier in January. He had flown home from Berlin, where he had been transferred in a comatose state after what his supporters, and some international observers, allege was a state-sponsored poisoning with the nerve agent Novichok.

The opposition figure is accused of violating the terms of a three-and-a-half-year suspended sentence for fraud. He is due to stand trial over the charges in early February.

How women played a major role in Yemen’s Arab Spring