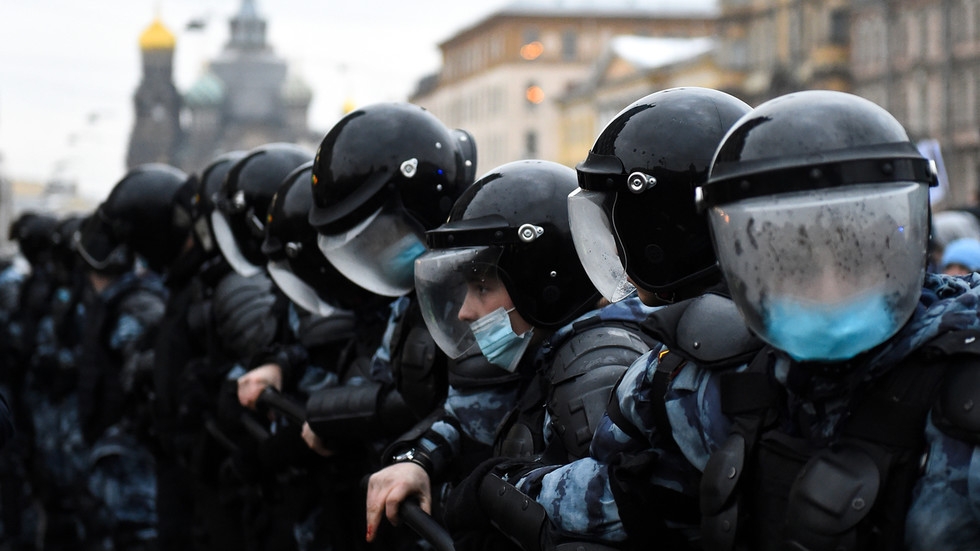 Officials are looking into a viral video of a Russian police officer kicking a woman to the ground amid unsanctioned Navalny protests in St. Petersburg. A local police chief reportedly apologized to the victim.

“We are studying this video,” a spokesperson for St. Petersburg police, Vyacheslav Stepchenko, told the Russian RBC news channel.

A short statement on a local police authority’s website said that a probe has been launched in relation to “an incident involving a woman and a police officer” that had occurred at the same location where the video was made.

A short clip, that caused outrage on social media, shows a woman approaching three officers in riot gear who are escorting a detained man. The woman asks: “Why did you grab him?” An officer responds by immediately kicking the woman in the stomach, knocking her to the ground.

A person who filmed the altercation told a local news website Fontanka.ru that the woman was peaceful, and had been only verbally condemning officers that were making arrests during the protests. The witness said that the woman hit her head after being kicked. The victim was said to be aged 54.

A local senior police chief, Colonel Sergey Muzyka, visited the woman in hospital on Sunday, the spokesperson for the city’s police told the media. He reportedly “apologized” to her on behalf of police, and stressed that unlawful actions by the officers are “unacceptable.”

There were conflicting reports about the woman’s injuries. The RIA Novosti news agency quoted the hospital as saying that her condition was “serious.” Some other outlets said she had lost consciousness after sustaining a head trauma.

The hospital’s head, Vadim Manukovsky, however, told the Podyom news website that the woman had only “light” injuries, and was awake and “feeling great.”

The police, meanwhile, said they have arrested a person who punched a traffic officer in another viral video that was filmed on Saturday in St. Petersburg. The incident occurred near the square where the protest was taking place.

The police told RIA Novosti that before the altercation, which was caught on tape, the assailant had climbed atop of a tow truck and hit a different officer, who was trying to bring him down.

The city’s investigative authorities reported on their website that a criminal case was launched against the attacker. They said he punched two officers, without mentioning the details about the tow truck.

Supporters of jailed anti-corruption campaigner Alexey Navalny gathered for unsanctioned protests across Russia on Saturday. The organizers failed to obtain permits for the rallies due to Covid-19 restrictions. The protesters clashed with police in some cities. According to OVD-Info, an opposition police-tracking NGO that has received Western funding, 3,435 people were detained in relation to the protests.

Navalny was arrested earlier this month, pending trial over suspected violations of his probation terms, which date back to a suspended prison sentence in a 2014 fraud case. On January 17, the activist returned to Moscow from Germany where he was recovering from an alleged poisoning. Navalny suddenly fell ill on board a plane in Russia last year.

Russia’s prison service said that Navalny repeatedly failed to show up to a police station for registration in 2020 prior to his arrival in Germany. Officials said he then skipped police visits after being discharged from a Berlin clinic. Navalny argued that he chose to stay in Germany for several more months to continue his rehabilitation.

German authorities said they found traces of the Novichok nerve agent in Navalny’s system. The activist accused Russian secret services of attempting to kill him. The Kremlin has categorically denied any involvement in the case, and instead claims Navalny is working with foreign intelligence agencies in a bid to smear Russia.

Inauguration’s most ‘enduring image’? To deluge of mockery, Atlantic journo says it was Kamala Harris’s ‘hair blowing in the wind’