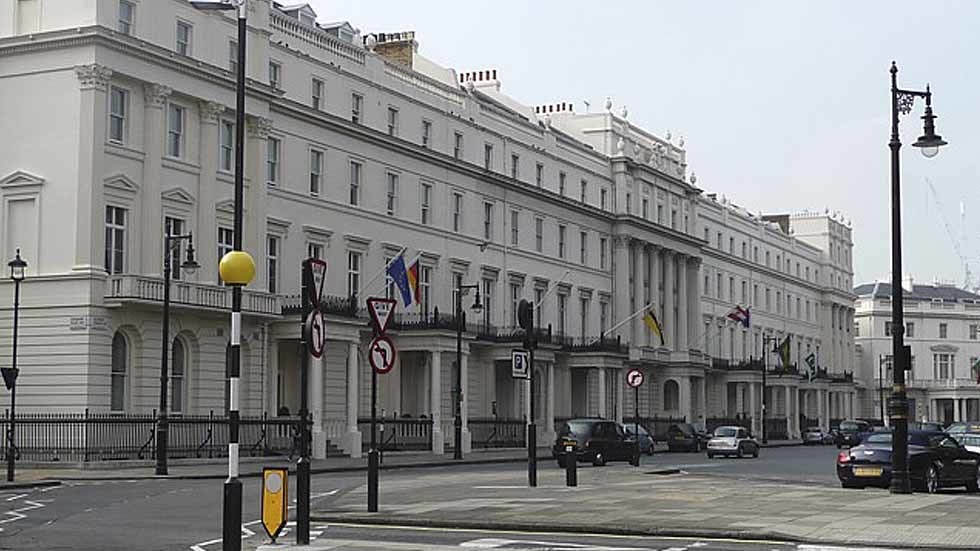 A judge in Moscow has ordered the seizure of a luxury townhouse from a fugitive financier, as part of a criminal case brought against the former banker for allegedly misusing clients’ funds and issuing illegitimate loans.

Georgy Bedzhamov, who owned the now-defunct Vneshprombank, is accused of a catalog of fraudulent transactions amounting to 113 billion rubles (close to $1.5 billion).

On Thursday, RBK reported that the Tverskoy District Court stripped him of his opulent London house, spread across two streets and estimated to be worth close to $50 million. Located in the British capital’s smart Belgrave Square, the two connected properties share an address, and a communal garden, with the embassies of Spain, Austria, Turkey, Germany, and the United Arab Emirates.

Bedzhamov has remained in London while the case was being brought by Russian prosecutors, and an extradition deal is reportedly being negotiated to see him return to face the charges. His wife, Alina Zolotova, and their two youngest children, live in Monaco.

Moscow’s Central Bank revoked Vneshprombank’s license to operate in 2016. At the time, it owed its creditors more than 200 billion rubles ($2.6 billion), and its assets were seized to help cover the shortfall. In 2019, Bedzhamov’s assets in the UK were frozen, but he was still allowed to make limited business transactions under British law. Under the terms of the ruling, he can spend up to around $137,000 on ‘personal expenses’ each month from a pot of $19 million held by his lawyers.

There is no guarantee that authorities in London will immediately recognize the decision of the court in relation to Bedzhamov’s townhouse. Russian authorities will now petition England’s High Court to enforce the seizure.

Will Asia actually fuel a comeback in coal?