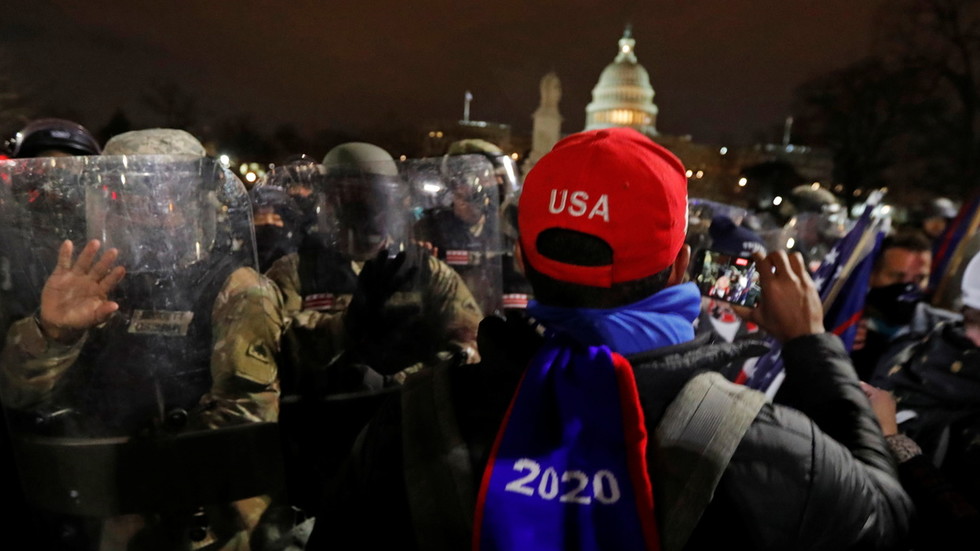 After some of his supporters stormed Congress, US President Donald Trump said they had been wronged and mistreated but should go home in peace and “remember this day forever,” as Facebook, Twitter and YouTube restricted his posts.

“These are the things and events that happen when a sacred landslide election victory is so unceremoniously & viciously stripped away from great patriots who have been badly & unfairly treated for so long,” Trump tweeted on Wednesday evening, as protesters were leaving the US Capitol and a curfew went into effect.

“Go home with love & in peace. Remember this day forever!” he urged.

Twitter first restricted interactions with the tweet citing “risk of violence,” – along with the perfunctory denunciation of Trump’s claims about the election as “disputed” – before deleting it altogether for “violating Twitter rules.”

Hundreds of demonstrators broke through the security fence around the Capitol on Wednesday afternoon, eventually making their way through the Capitol Police and breaching the Senate and House chambers and offices. One woman was shot by police and later died.

The lawmakers, who had been meeting to formally certify Democrat Joe Biden’s victory in the 2020 election – which Trump maintains was plagued by fraud in half a dozen states – interrupted the session and were evacuated to the nearby Fort McNair Army installation.

“I am asking for everyone at the US Capitol to remain peaceful. No violence!” Trump tweeted around 3 pm. “Remember, WE are the Party of Law & Order – respect the Law and our great men and women in Blue. Thank you!”

I am asking for everyone at the U.S. Capitol to remain peaceful. No violence! Remember, WE are the Party of Law & Order – respect the Law and our great men and women in Blue. Thank you!

Thousands of the president’s supporters had gathered in Washington, DC on Wednesday to protest the “stolen” election and demand of Congress to not certify the votes.

Citing the unrest, a number of Democrats have called for impeaching Trump again and expelling any Republicans who might back him, while GOP members rushed to denounce attacks on “our democracy” and vowed to back Biden.

‘He’s even learning the language to face Khamzat’: Fans joke Darren Till in line to face Chimaev after Instagram post in Russian

In Case 'Ewe' Missed It: The sheep, the steep and the ski city