Home > INDIA > Rahul Gandhi Jumps Into The Sea, Swims With Fishermen In Kerala 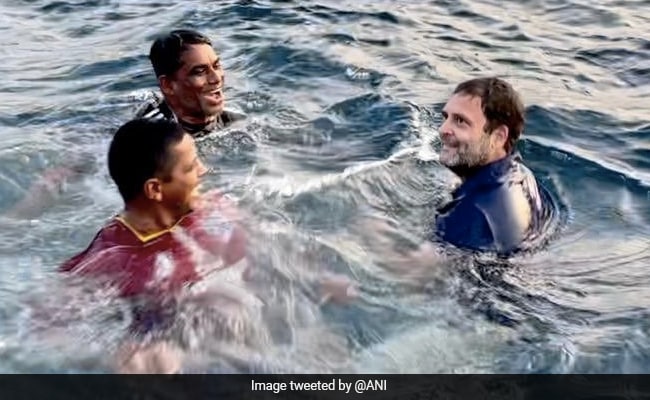 Rahul Gandhi Jumps Into The Sea, Swims With Fishermen In Kerala

Rahul Gandhi jumped into the sea and swam for around ten minutes, Congress sources told PTI

Congress leader Rahul Gandhi, during his visit to poll-bound Kerala on Wednesday, dived into the sea with local fishermen while out fishing.

Mr Gandhi was on a boat with several fishermen when he suddenly jumped into the water. The 50-year-old MP swam for 10 minutes before returning to the shore, news agency PTI reported quoting Congress sources. He was accompanied by four Congress leaders including KC Venugopal and TN Prathapan.

A video of the Congress leader swimming in the sea with two others has made its way to social media.

#WATCH| Kerala: Congress leader Rahul Gandhi took a dip in the sea with fishermen in Kollam (24.02.2021)

Mr Gandhi, dressed in blue t-shirt and khaki trousers, jumped from the boat when he saw some fishermen jumping into the sea after casting their net to catch fish. He changed his clothes after returning to Kollam’s Thangassery beach.

“He jumped without informing us… All of us were stunned but he was very cool. He spent around 10 minutes in the sea water. He is an expert swimmer,” a Congress functionary told PTI.

The Wayanad MP, who has been touring the state for the last two days, had ventured into the sea with around 23 fishermen. He also tried his hand at fishing with them.

Kerala: Congress leader Rahul Gandhi swam in the sea with fishermen during his visit to Kollam yesterday.

Mr Gandhi spent over two and a half hours at sea, interacting with fishermen and listening to their problems, PTI reported quoting party sources.

The fishermen served Mr Gandhi bread and fresh fish curry they prepared on the boat.

Biju Lawrence, the boat owner, said the Congress leader asked them about their family and sources of income, PTI reported.

Rahul Gandhi also repeated his call for a separate fisheries ministry despite being fact-checked last week by the government and Union Minister for Fisheries, Animal Husbandry and Dairying, Giriraj Singh.

During his visit to Puducherry, also heading for polls, Mr Gandhi had called fishermen the “farmers of the sea” and had talked about the need for a separate ministry for fisheries. Minister Giriraj Singh and several other BJP leaders mocked him for demanding a ministry that was set up in 2019.

Despite this, Mr Gandhi again said he would strive to have a separate ministry for fisheries at the Centre, this time in Kerala.

Weeks ago, Mr Gandhi’s sister Priyanka Gandhi Vadra had posted a video of a rowing lesson from a boatman in Uttar Pradesh’s Allahabad. She has been visiting UP frequently, where she has been tasked with reviving the Congress ahead of the crucial 2022 elections in the state.

Hit TV show Frasier to be revived after 20 years