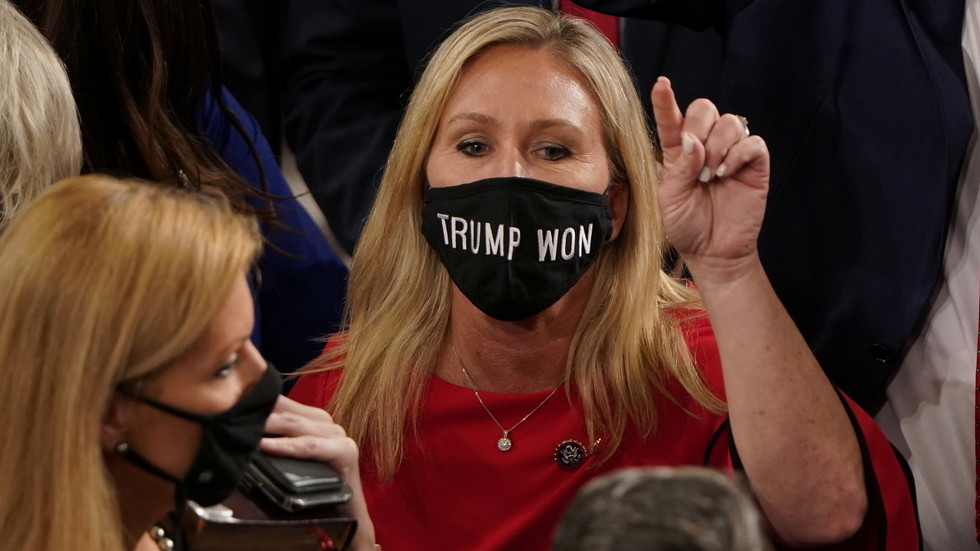 A Republican member of the US House of Representatives has filed articles of impeachment against the freshly inaugurated President Joe Biden, underscoring how the whole process has become politically weaponized.

Rep. Marjorie Taylor Greene (R-Georgia), elected to her first term in November, accused Biden of being “unfit to hold the office” and a “lengthy and disturbing” pattern of “abuse of power” while he was Barack Obama’s vice president, citing his threats to the Ukrainian government and his son Hunter Biden’s shady business deals overseas among the examples.

I just filed Articles of Impeachment on President @JoeBiden. pic.twitter.com/mcwEEkKiHL

In a statement on Thursday, Greene said Biden has shown he would do “whatever it takes” to bail out his son and “line his family’s pockets with cash from corrupt foreign energy companies.”

“President Biden residing in the White House is a threat to national security and he must be immediately impeached,” she added. In filing the articles, the Georgia congresswoman kept the promise she made a week ago, to impeach Biden on his first full day in office.

The motion is extremely unlikely to succeed. Republicans are a minority in the House of Representatives, and Greene herself hardly speaks for the party as a whole. She has also been under relentless media attack for months as a conspiracy theorist, from “QAnon” to the mass shootings in Sandy Hook and Parkland as “false flags.”

Her motion to impeach Biden, however, shows that the impeachment process – originally intended for extreme circumstances when US presidents had to be removed for “high crimes and misdemeanors” such as treason – have become a political weapon.

Congressman Al Green (D-Texas) actually filed articles of impeachment against President Donald Trump three times over the first two years of his term, which were voted down in the House. It wasn’t until late 2019 that the Democrat-dominated House voted – along partisan lines – to impeach Trump, claiming that him bringing up Biden’s publicly made admission about browbeating Ukraine into firing a corruption prosecutor amounted to soliciting foreign election interference. The Senate acquitted him in January 2020.

House Speaker Nancy Pelosi (D-California) dispensed with even a pretense of an investigation last week, when she held a vote to impeach Trump a second time. Pelosi accused Trump of “inciting insurrection” at the Capitol on January 6, when some of the president’s supporters disrupted the joint session of Congress that sought to certify Biden’s election victory.

The incident, which Trump and the entire Republican party have condemned and disavowed, has been held up as the same thing as the 1861 “rebellion” of eleven states that tried to set up the Confederacy. The evenly divided Senate – with Vice President Kamala Harris as the tie-breaker – is now reportedly negotiating the terms of Trump’s trial sometime next month, even though he is no longer in office.

When someone pointed out that Democrats have filed impeachment articles against every Republican US president since Dwight Eisenhower, the internet “fact-checkers” quickly labeled it “mostly false” because there had been no move to impeach Gerald Ford.

“While a handful of Democratic lawmakers have introduced articles of impeachment against five of the last six Republican presidents, in most cases these efforts weren’t taken seriously by the party at large,” Snopes declared in September 2019, as if proving a point.

The vehicle that got a village smiling

Rémy Julienne: Stunt king to the stars who fell to Covid