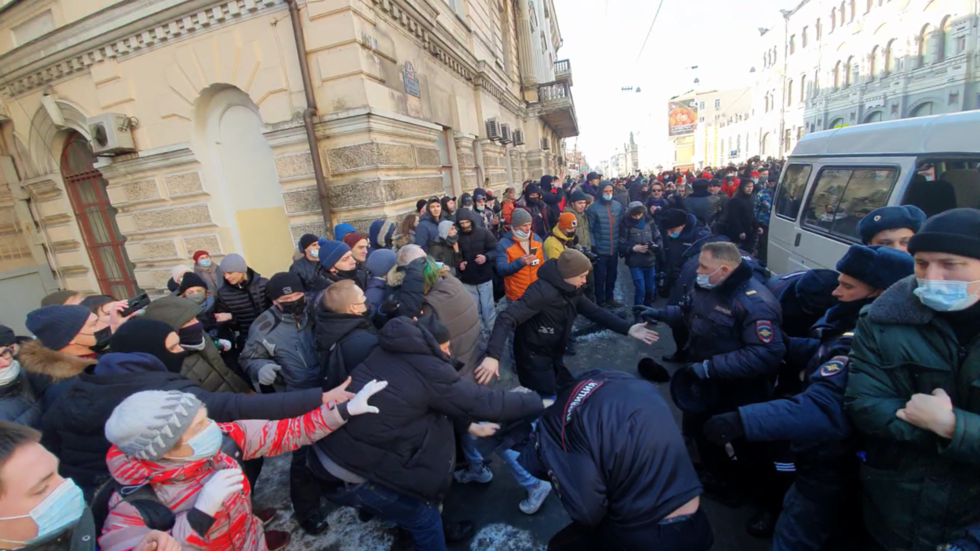 Tensions ran high as protesters clashed with police officers in an attempt to stop arrests at an unsanctioned rally in the Russian eastern city of Vladivostok on Saturday.

A video from Ruptly shows a crowd trying to stop the officers from dragging a detained protester to a police bus. Several men punched an officer in the head. Some officers lost their headgear in the struggle, and other torn off items of uniforms were seen lying on the pavement.

Rallies in support of anti-corruption activist Alexey Navalny are being held in different cities across Russia. The gatherings are effectively illegal as the organizers failed to obtain permits due to Covid-19 restrictions.

Navalny was arrested earlier this month, pending trial over the violation of probation terms that stem from a 2014 fraud conviction. On January 17, he returned to Moscow from Germany, where he was recuperating from alleged poisoning. The activist suddenly felt ill on board a plane in Siberia last year.

German officials said they found traces of the Novichok nerve agent in Navalny’s system. Navalny accused the Russian secret services of trying to kill him. The Kremlin has denied any involvement in the incident.

Russia hits EU with sanctions in backlash over Navalny sting

Pierre Cardin: The French fashion designer ‘one step ahead of tomorrow’