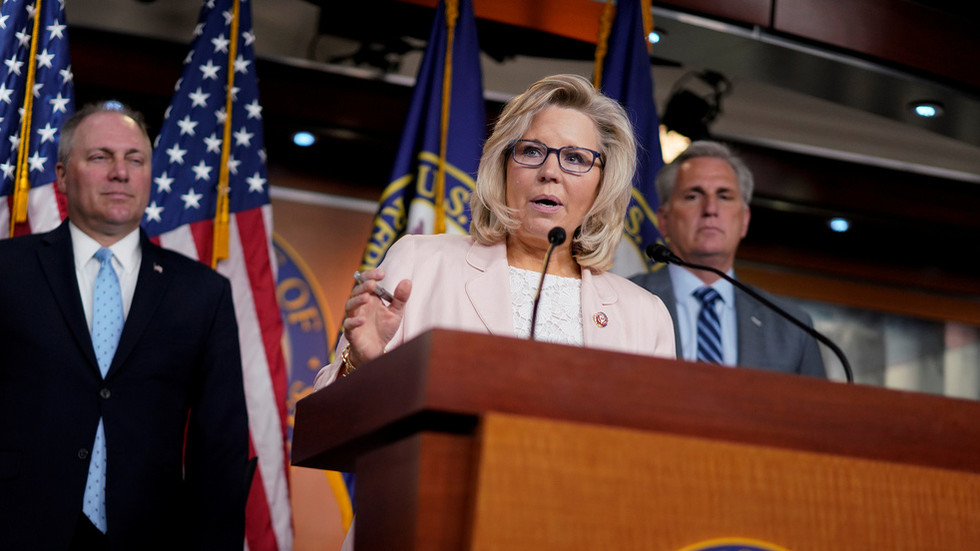 Hundreds of protesters convened at the Wyoming State Capitol to voice rage at GOP Congresswoman Liz Cheney, blasting the war-loving rep in her home state after she backed impeachment for ex-president Donald Trump.

A sizable crowd gathered at the state house in Cheyenne on Thursday – estimated around 300-strong by a local reporter – to call for Cheney’s ouster, frequently erupting into chants of “Go home Cheney!” and “USA!” Footage of the protest captured by videographer Brendan Gutenschwager has circulated online.

Hundreds gathering outside the Capitol Building in Cheyenne today, protesting for the impeachment of Liz Cheney, third-ranking Republican in the U.S. House of Representatives, after her support of Trump’s impeachment #LizCheney #Wyoming #Impeachment #Cheyenne pic.twitter.com/TWvVpeaeek

Chants of “Go home Cheney” outside the Wyoming State Capitol as the crowd awaits the first speakers of the afternoon #LizCheney #Wyoming #Impeachment #Cheyenne pic.twitter.com/8IpbxfX0aU

The third-ranking GOP rep in the House, Cheney has drawn the ire of much of the Republican base over her support for a Democrat-led drive to impeach Trump. Before he left office earlier this month, Cheney accused Trump of inciting the January 6 riot at the US Capitol, calling her vote in favor of impeachment an act of “conscience.”

Florida Republican Matt Gaetz showed up at the rally to address the protesters, tossing red meat to the crowd while bashing the Wyoming legislator for her pro-war positions and ties to corporate interests.

And since the people of Wyoming are clearly not thrilled with Liz Cheney, let’s find someone who can replace her and actually do that job well.

At one point on stage, Gaetz called up Donald Trump Jr., allowing the son of the former president to briefly speak to the protesters. According to Politico’s Tara Palmeri, Gaetz said he had spoken to the elder Trump himself on Wednesday night, and that the ex-POTUS helped him craft his speech.

Donald Trump Jr. phones into the rally, calling for a primary challenge to Liz Cheney in response to her support of the second Trump impeachment #Cheyenne #Wyoming #MattGaetz #LizCheney pic.twitter.com/W5BuBRj4yK

Gaetz took to Twitter later on Thursday to run a victory lap, cheering the “massive crowd” that “turned out to support my call to defeat Liz Cheney,” who is up for reelection in 2022.

This massive crowd turned out to support my call to defeat ⁦@Liz_Cheney⁩ in Cheyenne, Wyoming.

According to a poll conducted by Trump’s own political outfit, Cheney faces staunch opposition in her home state, where 73 percent of Republican voters took a negative view toward the congresswoman. Only 10 percent of party members surveyed said they would vote for her in the next race, suggesting her vote for impeachment could carry steep costs.

Thursday’s event wasn’t without its counter protesters, though some appeared more interested in heckling Gaetz, rather than supporting Cheney, as one group was seen with a large banner reading “Florida fascist.”

Cheyenne antifascists are out today as well, protesting Matt Gaetz for coming in from Florida for today’s rally at the Wyoming State Capitol #Cheyenne #Wyoming #MattGaetz #LizCheney pic.twitter.com/q3jLnBjdQ1

some are here on the periphery to support Cheney pic.twitter.com/EVhb7jXYyv

Cheney – the daughter of disgraced ex-vice president Dick Cheney, who helped to launch the bloody 2003 invasion of Iraq – is not the only Republican facing backlash over their pro-impeachment votes. Nine others also supported the effort, which is still winding its way through the Senate. The fate of the initiative remains uncertain, however, as impeachment is typically reserved for sitting presidents. Over objections from many in the GOP, Democrats insist the process is constitutional and practical, aiming to bar Trump from ever serving in public office again.

Bell stolen by Nazis to be returned to Poland