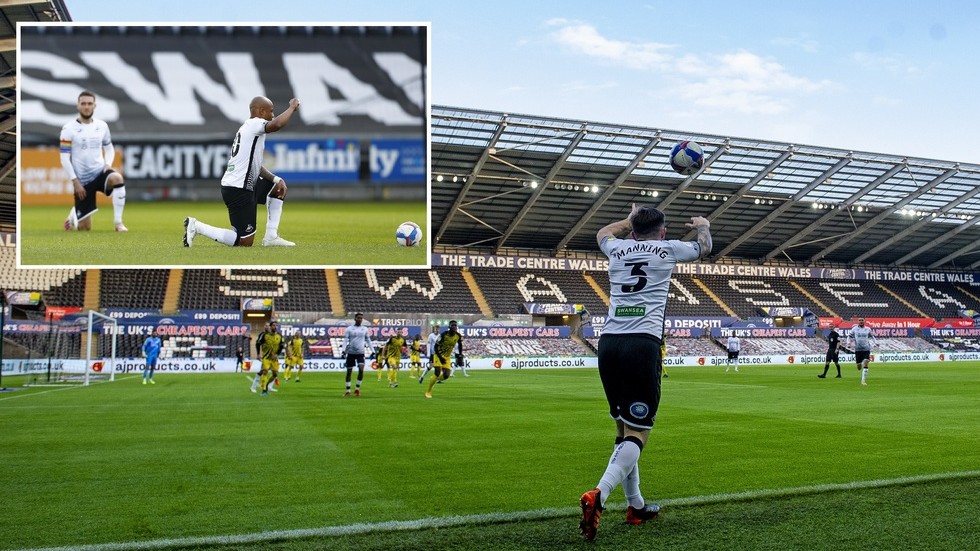 An increased police presence outside Swansea City’s Liberty Stadium has been credited with stopping anti-BLM fans from protesting before their team’s match with Watford on Saturday as players kneeled inside the stadium.

After a group of Swansea fans had gathered outside the stadium to boo and sound horns before their team’s two previous home games against Reading and Barnsley, the club and local South Wales police moved in to ensure the scenes were not repeated for the visit of Watford this weekend.

The police confirmed to UK media that they had been out in larger numbers than usual on Saturday, with a large fence being erected around the site of previous protests to stop angry fans from gathering to vent their unhappiness at players continuing to take a knee in support of Black Lives Matter.

Inside the Liberty Stadium, both sets of players continued with the gesture before kick-off in the Championship clash – as has become customary for footballers across the country. The game was played behind closed doors due to ongoing Covid-19 restrictions in the UK.

Footage shared on social media appeared to show a small group of Swansea fans taking to a nearby park to set off fireworks and klaxons to continue the protest, in what was described as “Plan B” because the area around the stadium “was crawling with police.”

“Bringing politics into sport is not on. Black Lives Matter is a Marxist organization which preaches anti-white hatred,” one protester was quoted as saying.

On Twitter, one user said the group of fans were “legends” for protesting the take a knee gesture by players, which they said was “symbolic with BLM political Marxism.”

“Remember what BLM stand for and have done… Politics should be kept out of football and sport,” added another.

After the previous protest against Reading, one person had queried: “Show me the law that says they can’t disagree with BLM.”

“It isn’t against black people, it’s against the racists at the BLM who would like to have lists against anyone who disagrees with them and their Marxist agenda,” wrote another.

The case follows a row over fans at other English league clubs booing when players took a knee before matches.

A group of Millwall supporters were condemned for their protest, while the chairman of League Two team Colchester said he would refund the season ticket cost for any fans booing while players took a knee, in a bid to keep them out of the stadium.

Fellow League Two team Exeter ejected a fan from their home stadium after booing was heard when players took a knee before kick-off in a match in December.

At Cambridge United, some supporters were banned after booing when players kneeled, while others were required others to be ‘re-educated’ before they can return to watch their team.

After the incidents with Millwall and Colchester, the English Football Association decided to take no disciplinary action but warned that “we will continue to monitor and investigate should similar crowd-related incidents occur.”

Swansea won Saturday’s game 2-1 and are flying high in second in the Championship table, four points behind leaders Norwich as they chase promotion to the Premier League.

US politics in 2021: What's in store for President-elect Biden?

Covid: The clarinettist who took on Lebanon’s vaccine scandal

Conservatives cry ‘bigotry!’ as Dems call for Parler to be PROBED BY FBI for role in US Capitol riot, alleged Russian ties