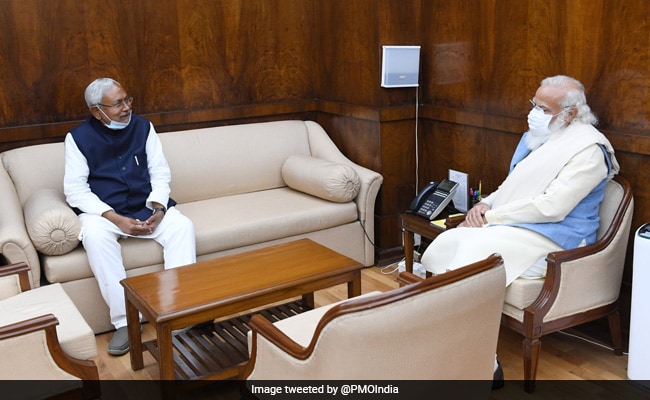 Bihar Chief Minister and JDU leader, Nitish Kumar, on Thursday backed the three contentious farm laws, saying they are in the interest of farmers and not against them. Speaking to reporters after meeting Prime Minister Narendra Modi, Mr Kumar said his party is with the government on the issue and that the centre has opted for the right path by holding talks with the farmer unions agitating against the three laws.

“Hopefully, the issue will be resolved soon,” the BJP ally said.

Thousands of farmers are protesting at various Delhi borders for more than two months demanding repeal of the three laws, which they find pro-corporate and against the existing mandi and MSP procurement systems. However, the government has rejected these fears as baseless.

Mr Kumar also made light of the claims of rival parties, including Lalu Yadav’s RJD, that his government in Bihar will not last its full term, saying if they are getting publicity out of it, then there is nothing wrong with that. He added in the same vein that these leaders are ignorant of realities.

This was Mr Kumar’s first meeting with PM Modi after his government assumed office in November last year.

Describing it as a courtesy meeting, the Bihar chief minister said he did not make any specific demand and they talked about a range of issues.

In power in Bihar since 2005 except for a brief period, this is the first time that Mr Kumar’s JD(U) is a junior partner in the alliance with the BJP after its tally fell to 43 seats in the 243-member assembly from 71 while the BJP jumped to 74 from 53.

Airlines Permitted To Fly Only 80% Of Pre-COVID Flights Till March-End: Centre