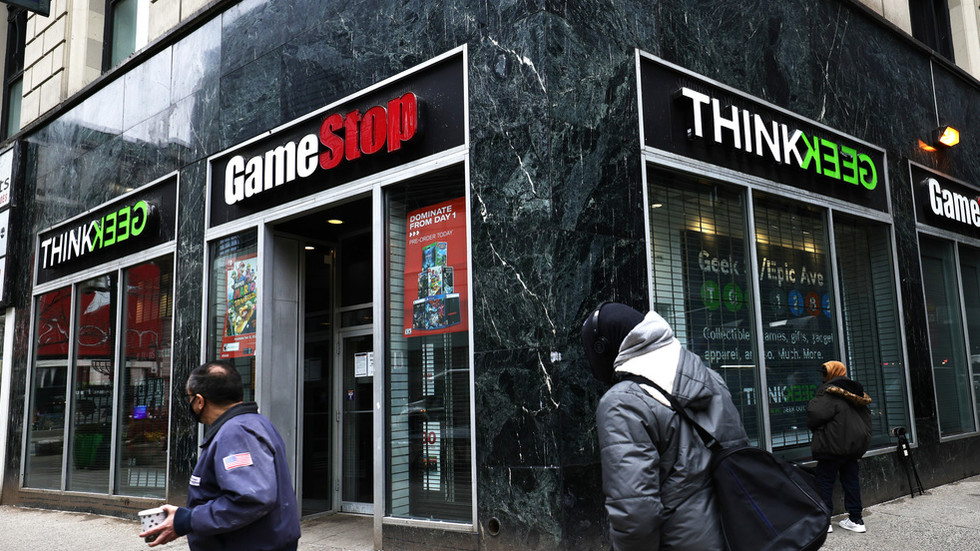 The NASDAQ has paused trading after internet “degenerates” spotted Wall Street gearing up to make a killing, beat the traders at their own game, and got filthy rich while destroying the US’ top hedge funds. Buckle up.

As trading opened, Friedman kept her word and the buying and selling of GameStop stock was halted intermittently throughout the morning, in a bid to stave off the “manipulation” she warned about. But what was it about one failing video games retail company that sparked such panic on Wall Street?

A fixture in American shopping malls, GameStop once held launch-night parties for the biggest annual releases, but has seen its business fall off a cliff in recent years due to digital purchasing and the decline of malls nationwide. Enter the short-sellers. Put simply, hedge funds looking to capitalize on a failing business can borrow shares in a company, immediately sell them, and ideally, buy them back later at a lower price to pay back the original lender while pocketing the difference. Should the price rise instead of fall, however, these funds have to pay back the shares at the new, higher price.

Profiting off a failing business may seem either a canny move or the epitome of vulture capitalism, but it’s a common practice. Wall Street’s top investing firms even help each other identify stocks ripe for the picking, as Citron Research did when it deemed GameStop a “failing mall-based retailer” in “terminal decline.” Citron Research and Melvin Capital both bought tens of millions of dollars worth of short positions in GameStop, but soon learned the hard way that in short selling, there’s no end to the amount of money one can lose.

The two million members of Reddit’s ‘WallStreetBets’ community took an interest in GameStop back in August when they noticed the arrival of pet supply e-tailer Chewy’s co-founder Ryan Cohen to its board, signaling there was some life in the company yet. When they noticed that Melvin Capital and Citron had bought the stock short, they decided to start buying, pumping up its value, partly to make a buck and partly to punish the hedge funds for profiting off the death spiral of a store ingrained in their childhood memories.

Throughout January, GameStop’s value shot up from $18 per share to $334 on Wednesday. As hedge fund managers whined and raged on television and Twitter, the WallStreetBets community dug their heels in and continued to buy.

Both funds took a beating, with rumors of Melvin Capital’s bankruptcy circulating on Tuesday. Melvin manager Gabe Plotkin told CNBC that these rumors were false, but the fund still needed a bailout of nearly $3 billion to cover its losses, before it closed its position that afternoon.

Citron’s Andrew Left said on Wednesday that he had managed to close his position at “a loss of 100 percent.”

Also, for those who dunno why they're flipping-out, a busted short has (to quote Investopedia, who phrases it nicely) "an infinite potential for loss" because the higher the price, the more money you lose, and you owe people shares (scarce), not money (plentiful). https://t.co/XLqSiDXdLW

With short sellers down $6 billion as of Tuesday, the self-described “degenerates” of WallStreetBets posted screenshots of their ballooning bank balances, reveling in their newfound wealth as Wall Street suffered. One poster reportedly turned $55,000 into $13 million, while another posted a screenshot of his $64,000 gain, announcing “I can now write my mom a check and put my sister through lymes treatment. This has been a very rough year, but I’m so thankful for every single one of you.”

The titans of Wall Street seethed. Investor Michael Burry, who made a fortune on the 2008 subprime mortgage crisis, said in a now-deleted tweet on Tuesday that trading in GameStop is “unnatural, insane, and dangerous” and there should be “legal and regulatory repercussions.”

Despite Burry’s call for punishment and Friedman’s fretting over “manipulation,” the amateur investors of WallStreetBets aren’t actually breaking the law. Their forum posts are considered free speech under the First Amendment, rather than illegal attempts to dupe investors.

“There’s been an awakening,” financial adviser Tim Collins wrote last week. “A large group of retail traders have realized if they work together…they can overpower any institution or short seller in the world, outside of the Fed, of course.” One Reddit poster put it more bluntly:

What I think is happening is that you guys are making such an impact that these fat cats are worried that they have to get up and put in work to earn a living.

This GameStop/Reddit/Melvin episode is one of the most amazing events in awhile. Read this great thread to understand the significance: https://t.co/XSf0YM1Izx

Redditors have done more to hurt Wall Street in 2 weeks than Occupy Wall Street, the Democratic Socialists of America, and the Bernie Sanders Presidential Campaigns were able to do in a decade.

Amid the celeration, some WallStreetBets users predicted an impending regulatory crackdown, especially given the astronomical donations Wall Street gave to Joe Biden and the Democratic Party in the runup to last year’s election.

“The speed in which Congress will probably pass legislation to prevent something like this GameStop thing from happening again will show you the difference between ‘immediate’ for Wall St and ‘immediate’ for people waiting on those $2k checks,” NFL running back and outspoken leftist Justin Jackson tweeted on Wednesday.

‘He loves me too much’: Pogba says Zlatan isn’t racist after storm over ‘voodoo’ jibe to Lukaku