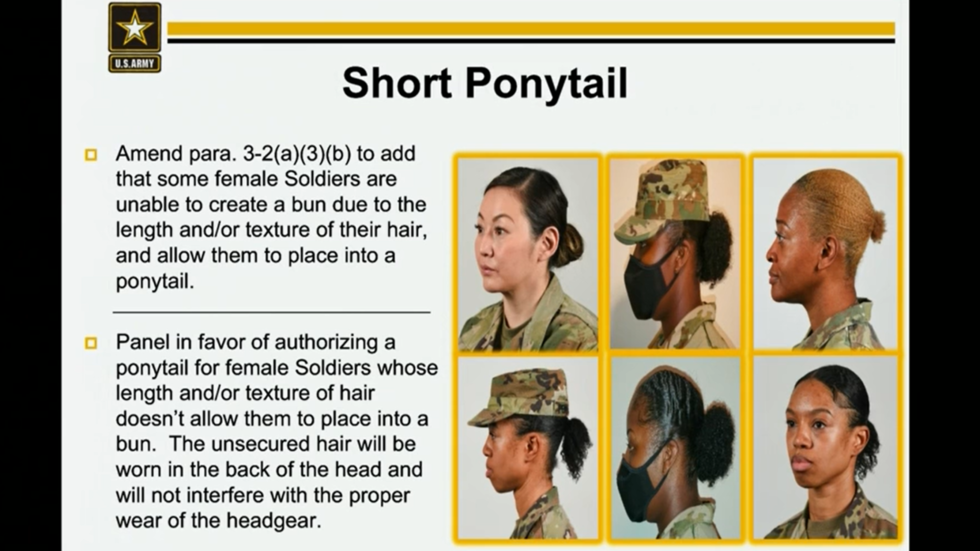 'Nail polish in camouflage'? Army eases grooming rules, allows PONYTAILS and LIPSTICK in the name of 'equity' and 'inclusion'

The US Army has relaxed uniform rules, such as allowing female troops to wear lipstick and earrings and letting men use clear nail polish – leaving some to wonder if wokeness has overtaken combat effectiveness as a top priority.

“Equity, inclusion and diversity are all very important to Army readiness because we have soldiers from all walks of life . . ., and we have to represent them so our Army policies must therefore promote equity and inclusion,” Lt. General Gary Brito said on Tuesday.

The #USArmy has revised Army Regulation 670-1, Wear and Appearance of Army Uniforms and Insignia.

The updates will be effective Feb. 25, 2021 and directly supports the Army’s diversity and inclusion efforts.

The revisions are effective in February and pertain mostly to female soldiers. For instance, women will be allowed to wear their hair as short as they wish, rather than having a quarter-inch (6.4mm) minimum, or to wear a long ponytail rather than a bun. Earrings, lipstick and nail polish will be allowed – with some exceptions – and women will be able to have highlights in their hair and use multiple styles at once, such as wearing twisted braids in a bun.

The new rules were unveiled just one day after President Joe Biden signed an executive order overturning former President Donald Trump’s ban on transgender enlistment in the military. And the revisions are being implemented with newfound sensitivity: updated regulations will be edited to remove “potentially offensive language” in describing hairstyles, such as “Mohawk, Fu Manchu, and dreadlock.” Even the words “eccentric” and “faddish” will be banned.

Army officials said a 17-soldier panel took suggestions from troops and decided on the rules changes. The inclusivity panel had just two men and four white people (all women). Whites make up 57 percent of the Army, and males account for nearly 87 percent.

While some of the revisions relate strictly to appearance preferences, others have practicality benefits. For instance, wearing a bun under a helmet is problematic, and a woman can shave her head at the start of basic training without finding herself at the end of the course with hair too short to meet regulations. And particularly for black women, being allowed to wear a short ponytail will prevent the scalp damage that can occur when troops force hair that is too short into a tight bun.

The sea change won’t only affect female soldiers, but is touted as “gender-neutral,” and will allow men to have their nails varnished with clear nail polish for the sake of protection against harsh chemicals.

But critics ridiculed the policy changes as the case of misplaced priorities. “Perfect,” one Twitter user said. “Got to look your best when killing over oil.”

Perfect, got to look your best when killing over oil.

Another commenter agreed: “Are you kidding me about this trivial stuff? You’re worried about lipstick and hair, and I’m worried about their mental health and putting an assault weapon in their hands with a license to kill.”

Thanks because I was losing sleep over this one. Are you kidding me about this trivial stuff. You're worried about lipstick and hair and I'm worried about their mental health and putting an assault weapon in their hands with a license to kill. But ya okay,focus on the nail polish

Others went even further, arguing that such gamesmanship undermines national security. “Who will defend America?” one observer asked. “Certainly not an Army that is more concerned about their hair than preparedness.”

Sad when discipline starts with hygiene/dress in Army military is not play time. Who will defend America . Certainly not an Army that is more concerned about their hair than preparedness

A former Army Cavalry officer said the new grooming rules follow a disturbing trend: “Is anything the Army does anymore even slightly geared toward warfighting or readiness?”

Is anything the Army does anymore even slightly geared towards warfighting or readiness?

Army officials, however, defended the changes as needed to keep up with modern trends. Sgt. Major of the Army Michael Grinston said the military needed to adapt. “Some people don’t like change, but that’s just how the world is,” he said. “It changes over time, and we need to change with it.”