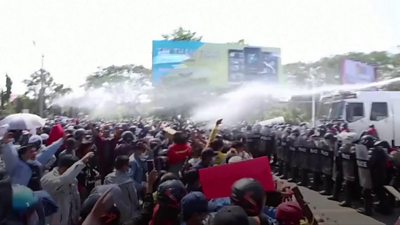 Police in Myanmar have fired rubber bullets during a demonstration in the capital Nay Pyi Taw, as thousands defied a ban on protests.

Water cannons and tear gas have also been used against protesters, who are standing against a coup that removed the elected government last week.

BBC Burmese has been told at least two protesters have been seriously injured.

Climate Change: How much did it cost US economy in 2020?

How will 'chipageddon' affect you?