Home > INDIA > My Name Is Not Sir, Rahul Gandhi Quips, Loud Cheers From Students In Puducherry 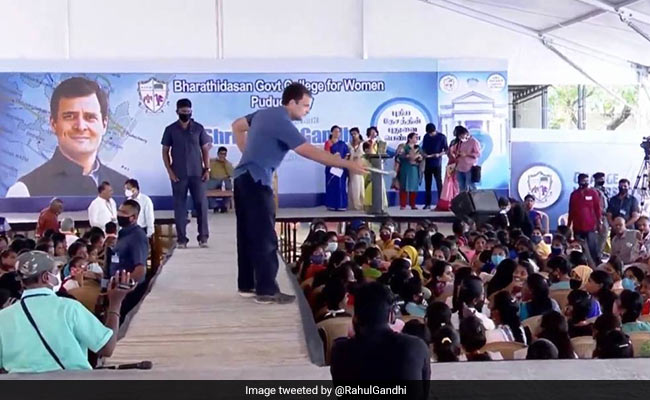 My Name Is Not Sir, Rahul Gandhi Quips, Loud Cheers From Students In Puducherry

“You can call me Rahul anna, that is good,” Rahul Gandhi tells the crowd amid cheers

A young student calls out to Congress leader Rahul Gandhi to ask him a question. “Sir, I am here,” the young woman says out loud from an audience of students at a college in Puducherry.

“Listen, my name is not sir. My name is Rahul, so call me Rahul please,” Mr Gandhi responded amid roaring cheers from the students. The video of the interaction has been shared the Congress party on its Facebook page.

The students at Bharathidasan Government College for Women could not stop cheering as the 50-year-old MP went on to add: “You can call your principal ‘sir’ and teachers ‘sir’ but you call me Rahul.”

The crowd broke out into a loud cheer again as Rahul Gandhi paced up and down the stage interacting with the students, smiling at them.

The student who wanted to ask him a question clapped and then proceeded to take the microphone back. Someone from the stage suggested, “Sir, may be they can call you Rahul anna?”

“You can call me Rahul anna, that is good,” the half a minute video ends on that note amid more cheer from the audience.

The video has been watched nearly 28,000 times so far and the Congress has labelled the video as “a candid moment.”

Rahul Gandhi was in Puducherry on Wednesday to launch the party’s campaign for the assembly election due by May. The Congress government is on the verge of collapse in the union territory after four resignations.

He also interacted with fishermen during his visit with Chief Minister V Narayanasamy accompanying him.

Facebook Australia: PM Scott Morrison 'will not be intimidated' by tech giant

Australia And Facebook In Talks Over Sweeping News Ban