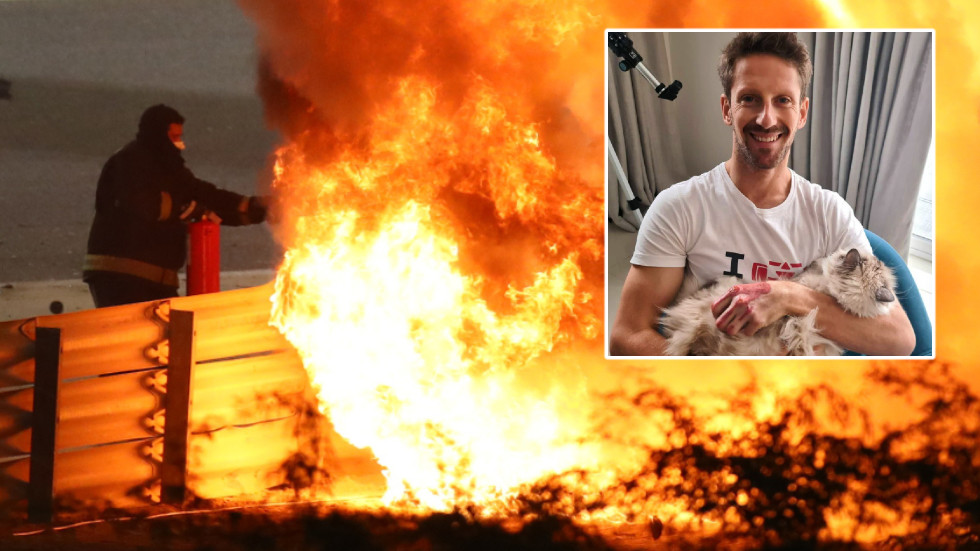 ‘My hands are back’: Formula 1 ace Grosjean continues recovery from near-death blaze – but warns squeamish fans over gory picture

Recuperating Formula 1 driver Romain Grosjean has held his cat in his hands in another sign of his recovery from the Grand Prix fireball that could have killed him – and warned sensitive fans not to look at a snap of his hands.

Fortunate Frenchman Grosjean was rescued from his car after it was engulfed in flames following a horrifying first-lap crash at the Bahrain Grand Prix in November, shocking viewers who feared for the 34-year-old’s life as the inferno of the wreckage blazed.

Grosjean later admitted that he had accepted the inevitability of his death before resolving to escape when he thought of his children growing up without a father – and he has now cradled an extended member of his family in another sign of his remarkable recovery.

“My hands are back and Petrus isn’t too unhappy about it,” Grosjean told his following of more than 1.4 million on Instagram, sharing a photo of himself as he held his fluffy feline in his arms.

There was a grimmer prospect for fans keen to gain a more precise insight into how Grosjean was healing. “It’s not yet pretty,” he admitted, warning squeamish supporters not to look at the second of his photo posts. “So please don’t swipe right if you don’t feel like it.”

Laying the outside of his hands out on a table, Grosjean’s injuries testified to the terrifying ordeal the relieved racing driver went through on the track.

While his right hand bore a relatively small cosmetic scar, the skin on much of his left clearly remained badly burned, with a deep circular wound visible at the base of his index finger.

Grosjean has been back in the gym training and was able to remove his hand from a dressing for the first time in 39 days last week and put his wedding ring back on.

He cannot go out in the cold yet, although he was able to cook his wife, Marion, and children a chocolate cake over the weekend.

Writing on Sunday, the former Haas star reported: “Full day with no dressing.

“Bloody hell, it feels good. So easy to forget how good our bodies are when working well.

“Back into dressing for the night before meeting my surgeon tomorrow to check the progress.”

India is now only 'partly free' under Modi, says report